To combat the negative environmental effects of coffee production, Finnish researchers are making sustainable coffee in the lab, growing brewable cells from bits of plant leaves.

The challenge: Coffee is one of the most popular beverages in the world — and that’s a problem because the process of producing coffee is environmentally costly.

The fertilizers and pesticides used to grow coffee plants can contaminate soil and waterways, and the production process requires a lot of water — the U.N. estimated it to be about 37 gallons per final cup of coffee.

Coffee production also contributes to deforestation, with one study estimating that four trees are felled to produce the coffee consumed by the average Western java drinker annually.

The idea: There are ways to produce more sustainable coffee beans — growing plants in the shade of trees can minimize deforestation and the need for pesticides, for example.

But scientists at Finnish research center VTT decided to try something way outside the box: rather than farming plants to harvest coffee beans, they grew coffee cells directly in the lab.

“The idea is to use biotechnology rather than conventional farming for the production of food and therefore provide alternative routes which are less dependent on unsustainable practices,” research leader Heiko Rischer told New Atlas.

“For example, these solutions have a lower water footprint and less transport is needed due to local production,” he continued. “There isn’t any seasonal dependency or the need for pesticides either.”

How it works: The process of producing the lab-grown coffee was similar to the one used to make lab-grown meat, only instead of starting with cells from an animal, the scientists cut bits of leaf off coffee plants.

“The cells are dried and roasted and then coffee can be brewed.”

They then use different growth mediums and environments to encourage the plant cells to replicate.

“Ultimately, the cells are transferred to a bioreactor from which the biomass is then harvested,” Rischer said. “The cells are dried and roasted and then coffee can be brewed.”

“In terms of smell and taste, our trained sensory panel and analytical examination found the profile of the brew to bear similarity to ordinary coffee,” Rischer said.

Getting it to taste delicious will still take some effort, though.

“[C]offee making is an art and involves iterative optimization under the supervision of specialists with dedicated equipment,” he continued. “Our work marks the basis for such work.”

The next steps: According to Rischer, the scientists believe they’re about four years away from scaling up production of their lab-grown sustainable coffee and securing the regulatory approval needed to sell it.

Just like lab-grown meat probably won’t replace farmed meat any time soon, VTT’s sustainable coffee isn’t likely to grind traditional coffee production to a halt — but if the faux joe catches on, it could help minimize some of the industry’s negative environmental effects.

“The true impact of this scientific work will happen through companies who are willing to re-think food ingredient production and start driving commercial applications,” Rischer said. 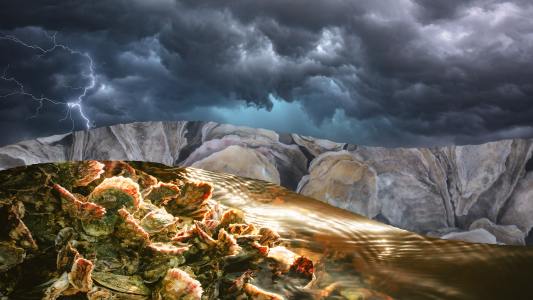 Coastal cities are turning to eco-engineering to protect their coastline from storm surges and hurricane damage. Their floodwater solution: building oyster reefs to act as a natural breakwater.