A DIY heater developed by Portland-based collective HeaterBloc is helping unsheltered people across the U.S. stay warm this winter — and the potentially life-saving units cost just $7.

The challenge: On any given night in America, an estimated 226,000 people are “unsheltered” or “unhoused,” meaning they’re sleeping in cars, tents, abandoned buildings, or other places outside of homes or shelters.

This situation is particularly dangerous during the winter months, when temperatures can dip below freezing.

Makeshift fires can produce toxic fumes and spread out of control across encampments.

“It’s hard to convey to the average person what it feels like to be unhoused in the winter,” HeaterBloc members told Vice. “An inescapable coldness that fills your lungs with ice and numbs your limbs. A damp cold that exhausts your body, one that you’d do anything to escape.”

In an attempt to ward off the cold, unsheltered people will sometimes burn wood, trash, kerosene, and whatever other flammables they can find. These fires can produce toxic fumes, especially if the fire is inside a tent, and if they aren’t carefully managed, fires can spread out of control across encampments.

A DIY heater: The members of HeaterBloc designed a tent-safe DIY heater to replace these makeshift fires. They then shared a how-to guide for making the devices online, so that people in other places could construct and distribute the heaters to unsheltered locals.

Those instructions have since been translated into several languages, and volunteers in at least a dozen cities are now making the heaters.

“Seeing the community that’s sprung up around this need and seeing people take real action to help houseless communities stay warm all over the country is incredible because this is literally saving people’s lives,” HeaterBloc said. “That’s all that really matters.”

How it works: At the core of the DIY heater is a mason jar filled with isopropyl alcohol (aka, “rubbing alcohol”). Alcohol burns very cleanly, so it’s safe to use indoors or in a small space, such as a tent.

Each end of a 10-inch-long segment of copper tubing is secured into a hole in the lid of the jar. In the middle of the segment is a loop, and in the bottom part of this loop is a tiny hole.

A piece of cloth long enough to touch the bottom of the jar hangs out of each end of the tube. This cloth feeds alcohol from the mason jar into the copper tube. When a flame from a lighter is held near the hole in the tube, the fumes exiting it ignite.

If the mason jar tips over, the flame goes out immediately, but for added safety, the jar is glued to a plate, surrounded by a wire cage, and topped with an inverted terra cotta pot — that pot not only helps control the flame, but also radiates steady heat.

The parts for each DIY heater cost about $7. A 6-8 ounce jar of isopropyl alcohol burns for about 5 to 6 hours and costs less than $1.

The big picture: While the DIY heaters may make winter more bearable for people living on the streets, they do not address the root cause of homelessness, which is mostly about the lack of affordable long-term housing.

We are seeing innovative solutions to that problem in the form of backyard tiny houses, 3D-printed neighborhoods, and data-driven social programs, but there’s still a long way to go to reach what HeaterBloc sees as the ultimate goal.

“Our desire would be that HeaterBloc would no longer be a need,” the collective said. “Society would accept and care for all of its members, acknowledging that housing is a human right rather than just a luxury.” 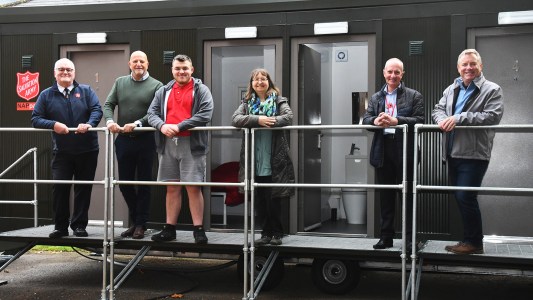 A pilot project to combat homelessness could help rough sleepers not only survive this winter, but maybe even get off the streets for good.