“I believe I found your uncle,” the message said. It came via LinkedIn in August 2018. Jasmine Cornett didn’t know who sent it to her, or how they knew her uncle was missing. She hadn’t seen him since he disappeared about two decades ago when she was a little girl.

A minute-long video, shot by a team helping homeless people, featured an unshaven man, in his 60s, saying he wanted to get reunited with his mother. Someone asked if he had any other family. He said he did: a brother, sister, and niece.

Cornett immediately knew it was her Uncle Wayne. She replied to the LinkedIn message and was put in touch with its source: Miracle Messages, a nonprofit that focuses on helping homeless people by reconnecting them with their family and loved ones. Within an hour, Cornett was standing in front of her uncle as he sat in his regular spot, on the steps of the Powell Street BART station in San Francisco.

“I had lived in the San Francisco area my entire life, and he was just sitting on the steps of the busiest BART station,” Cornett says. “I probably passed by him hundreds of times without even knowing. He was almost like a statue that you would just pass by.”

The idea that a person could be passed by unnoticed is precisely the reason Kevin Adler, CEO of Miracle Messages, launched the organization. After Adler’s uncle, who was also homeless for 30 years, died, Adler began seeing a link between the people on the street and his beloved uncle, and he began brainstorming ways of helping homeless people.

“I didn’t know their stories. I didn’t know who they were. I didn’t have any particular connection to them. So I just began by really listening to people on the street, having conversations, wanting to hear their stories, and seeing what was said,” he says.

Eventually, someone on the street told Adler that they were disconnected from loved ones and wanted to reconnect, and Miracle Messages was born.

Here is how it works: Volunteers for Miracle Messages canvass the streets, approaching people to let them know about the service they offer. Then, a person can create a message, like Cornett’s Uncle Wayne, in the form of an informal video and provide a little information about their family. Volunteer “digital detectives” then get to work using social media to locate the family.

Sometimes, finding their family can be simple, as in the case of Jose, who was sold into slavery as a child: Miracle Messages found his family was still living on the same farm in Mexico as when he disappeared. But lack of digital literacy, access to technology, mental illness, or simply fear or shame can be barriers that keep people from finding or contacting their families themselves.

“I probably passed by (my uncle) hundreds of times without even knowing. He was almost like a statue that you would just pass by.”


Jasmine Cornett, reunited with her Uncle Wayne in 2018

Cornett says her Uncle Wayne, who has schizophrenia, told her that he stayed away because he was embarrassed by his mistakes, including drugs and a few jail stints. He had always wanted to reconnect but was waiting for a time when he was “in a better place.” When the opportunity with Miracle Messages popped up, he grabbed it because he didn’t feel like he had much more time left on earth. Miracle Messages stepped in to facilitate the process.

The U.S. Interagency Council on Homelessness reports that 129,972 people are homeless in California, with 34,322 of them experiencing chronic homelessness. They say that access to housing, healthcare, and jobs (as well as reducing criminal justice involvement) are ways of helping homeless people.

But Adler adds that “relational poverty” can be a significant factor. People lose touch with their family or friends and no longer have a support network to fall back on. He believes that reconnecting with loved ones should often be a top priority. Miracle Messages has reunited more than 280 homeless people with their friends or family, and according to Adler, 80% of those reunions have led to positive improvements for their mental, physical, and social health — and 15% have led to stable housing or living with family.

For Cornett and her uncle, the reunion was life-changing. He got off the streets, found a group home to live in, enrolled in anger management and other self-help classes, and even started working out at the gym. Cornett describes her family as very close. They got him a landline phone (he doesn’t know how to use a cell phone), and she calls him regularly, ending every phone call with “I love you.” And the family sees Uncle Wayne weekly. He comes over for dinner or to help around the house. Wayne even accompanied Cornett when she took her dog to the veterinarian for cancer treatments. Cornett treasures simple moments like these while also morning the 20 years they lost.

For most of Cornett’s early childhood, she lived in the same household as her uncle. While she speaks fondly of her uncle, she also calls it a “tumultuous time.”

After he went missing, her grandmother’s (Wayne’s mother) dying wish was that she would see all four of her children together again. Cornett says that even though her grandmother died 12 years ago, Miracle Messages gave her family that gift, which “is something that you can never say thank you enough for. You can’t put any monetary value to it. You can’t do anything except for just embrace and love.”

People lose touch with their family or friends and no longer have a support network to fall back on.

Miracle Messages started in San Francisco, yet Adler has plans to expand by adding chapters in other cities. For now, the foundation is set up for people anywhere to turn to Miracle Messages for help, homeless or not. They can reach the organization via their mobile app, website, or the 1-800-Miss-You hotline, which always has volunteers standing by. And anyone can help reunite a homeless person in their city.

“It’s really as straightforward as having the courage to have a conversation with the neighbors on the streets,” Adler says.

Miracle Messages changed Cornett’s life in more ways than one. She says she used to walk past people on the streets and barely notice they were there. Now, she gives them a Miracle Messages card that has the hotline printed on it, giving away about ten cards each day during her lunch break. And she is involved in helping homeless people in other ways — volunteering to solve cases and serving on the board.

“To try and get as many people off of the streets as possible would probably be the best gift the world could do,” she says. 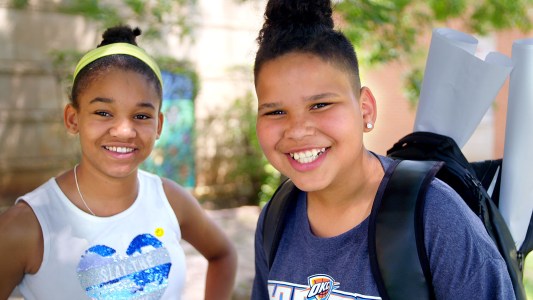 When a child faces chaos at home, it’s impossible to learn. This school is doing whatever it takes to help homeless students and their families create better lives.

Series | Catalysts
A school made for homeless children6:08
Subscribe to Freethink for more great stories
Subscription Center
Challenges
Video
Freethink
Subscribe
We focus on solutions: the smartest people, the biggest ideas, and the most ground breaking technology shaping our future.
Subscribe