Earlier this week, the Air Force flew an AI co-pilot on a U-2 spy plane. This marks the first time that the Air Force completed a military flight with AI.

Getting Off the Ground

Sitting in the left seat of the jet was human pilot U.S. Air Force Maj. “Vudu,” The AI co-pilot named ARTUµ, (a reference to R2D2 for Star Wars fans) served as a working aircrew member during their flight out of Beale Air Force Base — a significant forward step for digital age national defense.

This flight test was “the first time, to my knowledge, that you have a military system integrating AI, probably in any military,” Google’s former chief executive, Eric Schmidt, told the Washington Post.

They both used the aircraft’s radar to look for threats — the pilot looked for threatening aircraft while co-pilot ARTUµ looked for enemy launchers. But ARTUµ had the final say in how the radar was used — there was no pilot override. The mission was a success, with the human-computer duo teaming up to complete the objectives.

“(The AI’s) role was very narrow … but, for the tasks the AI was presented with, it performed well,” the human pilot, Maj. “Vudu”, referred to only by his call sign, told the WaPo.

But co-pilot ARTUµ, didn’t take to the California skies without ample training first. It had years of preparation.

U-2 Federal Laboratory researchers developed and trained the AI with over a half-million computer-simulated exercises to execute in-flight tasks that would usually be done by the human pilot.

They used a publicly accessible computer algorithm to train the AI. The algorithm, called µZero, was developed by AI research company DeepMind, and it can master video games like chess and Go without even knowing the rules, according to Will Roper, Assistant Secretary of the U.S. Air Force for Acquisition, Technology, and Logistics.

The Future Pairing of Human and Machine

“The fact ARTUµ was in command was less about any particular mission than how completely our military must embrace AI to maintain the battlefield decision advantage. Unlike Han Solo’s ‘never-tell-me-the-odds’ snub of C-3PO’s asteroid field survival rate (approximately 3,720 to 1), our warfighters need to know the odds in dizzyingly-complex combat scenarios,” Roper wrote.

This flight test was “the first time, to my knowledge, that you have a military system integrating AI, probably in any military.”

But Schmidt, who previously headed the Pentagon’s Defense Innovation Board, told WaPo that it isn’t likely the military will move entirely to autonomous weapon systems.

This flight happened only a month after a human battled an AI fighter jet for the first time. And there is more to come. The U-2 Federal Laboratory created this AI technology so it can be updated and transferred to other systems.

With the military embracing AI technology, they are staying one step ahead in the digital age. It might not be long before humans and artificial intelligence become equal teammates — and adversaries — in military conflicts. 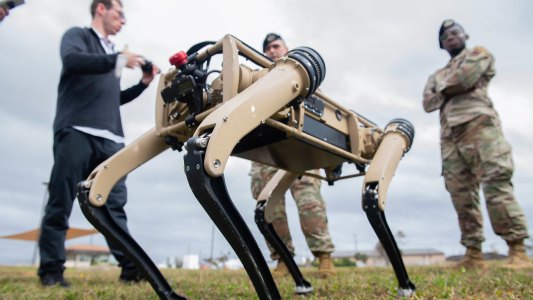 Four robot dogs are heading to a Florida Air Force base to serve as security patrol, marking the U.S. military’s first full-time deployment of a robot dog.

Robotics
Robot dogs are being deployed at a US military base
By Kristin Houser
Subscribe to Freethink for more great stories
Subscription Center
Sections
Video
Freethink
Subscribe
We focus on solutions: the smartest people, the biggest ideas, and the most ground breaking technology shaping our future.
Subscribe