NASA’s free-flying Astrobee robots just demonstrated a new ability aboard the International Space Station (ISS) — putting us a step closer to a future in which autonomous bots serve as astronauts’ partners in space.

Space science: The ISS is the world’s only microgravity lab, where astronauts can conduct experiments that would otherwise be impossible. These experiments can lead to breakthroughs that shape our future in space and here on Earth, too.

The list of potential microgravity experiments is neverending, though, and the ISS is only designed to support a crew of seven. Those astronauts also have to make time for routine duties, such as cleaning filters, taking inventory, and moving cargo around their home in space.

The robots use fans to propel themselves and cameras and sensors to see where they’re going.

The Astrobees: In 2019, NASA sent three cube-shaped robots to the ISS. Collectively known as the Astrobees, the robots’ purpose is to help out with simpler tasks on the ISS so that astronauts can spend more of their time on experiments and complicated activities.

The robots — Honey, Queen, and Bumble — float freely on the ISS, using electric fans to propel themselves through the station and cameras and sensors to see where they’re going. They can work autonomously or be controlled remotely by astronauts on the ISS or people on Earth.

During their first three years in space, the Astrobee robots completed more than 100 activities, including a simulation in which Bumble successfully tracked down the cause of a high concentration of CO2 aboard the ISS — a situation that could be fatal for astronauts.

What’s new? Two of the Astrobee robots have now done something unprecedented, simultaneously completing individual tasks without any hands-on help from astronauts. Prior to this, the robots had only operated one at a time or with more help from their human co-workers.

During the milestone, Queen recorded its first 360-degree panoramic image of the ISS’s interior, while Bumble gathered station mapping data in the Harmony module.

The big picture: NASA plans to continue expanding the Astrobee robots’ capabilities aboard the ISS as part of its Integrated System for Autonomous and Adaptive Caretaking (ISAAC) project.

The goal of ISAAC is to develop software that will allow the operating and robotics systems on future spacecraft and space stations, such as the in-development Gateway, to operate autonomously.

NASA plans to begin constructing Gateway in 2024, and unlike the continuously crewed ISS, it might only be occupied for six weeks per year — so having autonomous systems to maintain the station when it’s empty will be vital.

“ISAAC is a key to making a station like Gateway work,” said Trey Smith, ISAAC’s project manager. “The farther we go out into space, the smarter our spacecraft and robotics systems will need to be.”

“Our long-term vision is that [ISAAC] can transform a spacecraft into an autonomous robotic system itself,” he added. 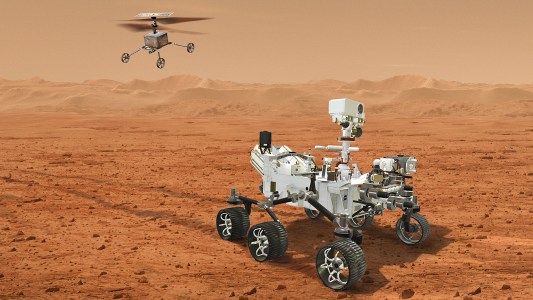 Inspired by the overachieving Ingenuity, NASA has updated the Mars Sample Return mission to include two new Mars helicopters.