Astronomers have taken a first detailed look at the dark side of a hot Jupiter exoplanet and discovered that it has the right conditions to produce metal clouds that rain “liquid gems.”

Hot Jupiter: The Earth is constantly rotating, so the side facing our sun is always changing, which is why we experience day and night. But some planets are “tidally locked” with their stars, which means one side faces the star at all times (the same way that the “dark side” of the moon always faces away from Earth).

The planet is what’s known as a “hot Jupiter,” which is physically similar to Jupiter but much hotter because it’s so close to its star. It’s 850 light years away from Earth, and circles its star once every 30 hours.

The dark side: Scientists can learn about the atmosphere and temperature of a tidally locked exoplanet’s day side by comparing the light they detect when it passes by its star to the light of the star on its own.

Gleaning insights into the dark side of a hot Jupiter, like WASP-121b, is trickier, as astronomers have to observe both the exoplanet and star during a minimum of one complete orbit.

A wild planet: Using the Hubble telescope, a team led by astronomers from the Max Planck Institute for Astronomy observed WASP-121b during two orbits around its star. They then modeled the temperature and amount of water vapor at different altitudes around the planet.

This is the first detailed measurement anyone has made of the global atmosphere of a tidally locked hot Jupiter — and based on the team’s observations, WASP-121b is a wild exoplanet.

On the day side, temperatures nearing 5,000 degrees Fahrenheit tear water molecules apart, and winds blow the atoms around the planet at 11,000 miles per hour — they turn back into water molecules when they reach the dark side, and the cycle starts again.

But dark still doesn’t mean “cool” on this planet. With temperatures ranging from 2,240 to 2,780 degrees Fahrenheit, the dark side is in the right range to host exotic clouds made of iron and the mineral corundum — which makes up rubies and sapphires — according to the researchers.

“These clouds, like water vapor, may whip around to the day side, where high temperatures vaporize the metals into gas form,” writes MIT News. “On the way, exotic rain might be produced, such as liquid gems from the corundum clouds.”

Looking ahead: The astronomers aren’t done with WASP-121b yet — they plan to use the newly launched James Webb Space Telescope to observe it later in 2022, and this time, they’ll be looking for changes in the exoplanet’s atmospheric carbon dioxide.

“That would be the first time we could measure a carbon-bearing molecule in this planet’s atmosphere,” lead researcher Thomas Mikal-Evans told MIT News. “The amount of carbon and oxygen in the atmosphere provides clues on where these kinds of planet[s] form.” 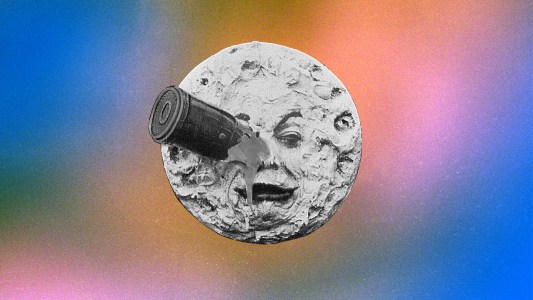 Outer Space
A rogue rocket is on course to crash into the Moon. It won’t be the first.
By Alice Gorman
Subscribe to Freethink for more great stories
Subscription Center
Sections
Video
Freethink
Subscribe
We focus on solutions: the smartest people, the biggest ideas, and the most ground breaking technology shaping our future.
Subscribe