Chinese researchers have developed a way for future moon astronauts to create oxygen and fuel using lunar soil — and the setup is so simple, a robot can do it.

The challenge: NASA plans to send people back to the moon as soon as 2025, with the goal of establishing a sustained human presence. This will give astronauts plenty of time to explore the lunar surface and conduct research that could help us put people on Mars.

Astronauts on long-term moon missions will need to take advantage of local resources.

Long-term missions will require more oxygen, fuel, and other resources than we can feasibly send up, though, so astronauts will need to take advantage of local resources — an approach called “in situ resource utilization” (ISRU).

What’s new? Past research has shown that CO2 and water — both of which are found on the moon — can be converted into oxygen and useful fuels through a process called “electrocatalysis.”

This process is driven by a material known as an “electrocatalyst,” and for a new study, Chinese scientists demonstrated how lunar soil — recently collected by China’s Chang’e 5 lander and loaded with copper — can serve as this electrocatalyst.

They then took the research one step further, building a robot that can prepare the electrocatalyst and set up the entire conversion system for ISRU.

Looking ahead: It’s not clear whether the Chinese team’s process or robot could actually be put into practice — the moon has very little copper, and this particular robot doesn’t appear to be designed to work in the lunar environment, which is dusty and has weaker gravity than Earth.

Still, many other groups are looking for ways to take advantage of ISRU on the moon — we’ve seen plans for extracting oxygen from regolith, building moon bases out of soil, and harvesting water from ice using rockets.

If we can develop automated systems like the Chinese team’s robot to handle these processes, it could free moon explorers to spend more time on exciting research and less on making sure they have enough air to breathe or water to drink. 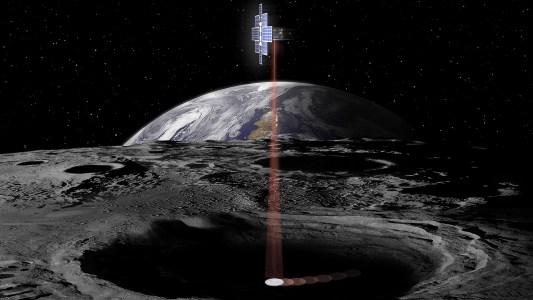 Aerospace
NASA “Flashlight” will hunt for hidden water on the moon
Subscribe to Freethink for more great stories
Subscription Center
Sections
Video
Freethink
Subscribe
We focus on solutions: the smartest people, the biggest ideas, and the most ground breaking technology shaping our future.
Subscribe