To minimize the cost of building Mars colonies, scientists at the University of Manchester have developed a way for astronauts to make their own concrete on the Red Planet using space dust — and human blood.

The challenge: If we want to establish Mars colonies, we’re going to need to construct buildings on the Red Planet where colonists can live and work.

However, sending construction materials from Earth to the Red Planet would be way too costly — every extra pound of payload increases the cost of a Mars mission by at least $2,400.

Scientists suggest astronauts build Mars colonies out of their own blood, sweat, and tears — literally.

Space dust: Rather than sending everything we need to build Mars colonies to the planet, experts suggest astronauts make use of the resources already there, such as its rocks and water deposits.

Now, University of Manchester scientists are suggesting astronauts build Mars colonies out of their own blood, sweat, and tears — literally.

“Scientists have been trying to develop viable technologies to produce concrete-like materials on the surface of Mars, but we never stopped to think that the answer might be inside us all along,” researcher Aled Roberts said in a press release.

Constructing Mars colonies: For a new study, the Manchester team simulated Mars dust and combined it with a common blood plasma protein to produce a material that, once dried, has about the same compressive strength as concrete — meaning it would be able to hold about the same load.

When they added urea — a waste material that could be extracted from human urine, sweat, and tears during water recycling — to the mix, the material’s compressive strength increased up to 300%, making it stronger than ordinary concrete.

The scientists dubbed their creation “AstroCrete” and calculated that six astronauts could produce about 1,110 pounds of the high-strength kind during a two-year mission.

If the material was used to bind together sandbags, they predict each astronaut could expand a Mars habitat enough during their mission to accommodate an additional colonist.

The cold water: The scientists note that more research is needed before AstroCrete can be considered a viable building material for Mars colonies.

In addition to testing the material under simulated Mars conditions to see how it would hold up, they also note a need to consider how donating plasma twice a week in microgravity might affect astronauts’ health.

Still, we’re likely decades away from building any Mars colonies, so they have time to dig further into their unique solution to the problem of off-world construction.

Aerospace
NASA discovers the perfect cave to live in on the moon
A newly identified lunar pit where the temperature is always about 63 F could be the perfect place for NASA’s future moon base.
Up Next 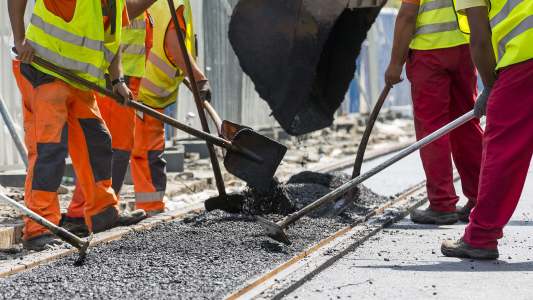 The United Kingdom is launching a world’s first trial to test whether adding graphene to recycled asphalt can increase a highway’s lifespan.