NASA’s Perseverance rover has officially started its Mars rock collection, stowing away a sample that will one day be shipped back to Earth.

“For all of NASA science, this is truly a historic moment,” Thomas Zurbuchen, NASA’s associate administrator for science, said in a press release.

Why it matters: Perseverance is the first spacecraft to collect rubble on the Red Planet to be brought to Earth — and rocks could revolutionize our understanding of Mars.

“Just as the Apollo Moon missions demonstrated the enduring scientific value of returning samples from other worlds for analysis here on our planet, we will be doing the same with the samples Perseverance collects as part of our Mars Sample Return program,” Zurbuchen said.

“Using the most sophisticated science instruments on Earth, we expect jaw-dropping discoveries across a broad set of science areas, including exploration into the question of whether life once existed on Mars,” he continued.

Trial run: The Perseverance rover landed on Mars in February, but its mission to collect samples officially began on June 1. At that point, it began exploring a region of Jezero Crater believed to be home to some of Mars’ oldest exposed bedrock.

After NASA chose a site for the sample collection, Perseverance went to work, using a drill to extract a core about the size of a finger — but the Mars rock never made it into the sample container, likely crumbling before it could be stowed away.

“We weren’t trying to collect the atmospheric sample, but it’s not a waste of a tube.”

That sealed container will still be useful to NASA, though — scientists can study the Martian air within it to better understand the Red Planet’s atmosphere.

“We weren’t trying to collect the atmospheric sample, but it’s not a waste of a tube,” Jennifer Trosper, Perseverance project manager, told New Scientist.

Extracting the Mars rock: On September 1, Perseverance made its second attempt at collecting a sample of Mars rock from Jezero Crater, and NASA has now confirmed that the mission was a success — the rock was extracted, measured, and stashed in a sealed container.

“Getting the first sample under our belt is a huge milestone,” Ken Farley, Perseverance project scientist, said. “When we get these samples back on Earth, they are going to tell us a great deal about some of the earliest chapters in the evolution of Mars.”

The next steps: Based on first impressions of the Mars rock, NASA believe it might be a type of igneous rock called basalt, which would have formed through some sort of volcanic activity.

Such a sample itself probably doesn’t contain evidence of past microbial life on Mars, but Perseverance is expected to collect more than 40 samples during its mission, including some from areas that are more likely to include fossilized signs of life.

The current plan is for an ESA rover to collect Perseverance’s samples in 2028 and deliver them to a NASA vehicle, which will return them to Earth in 2031. 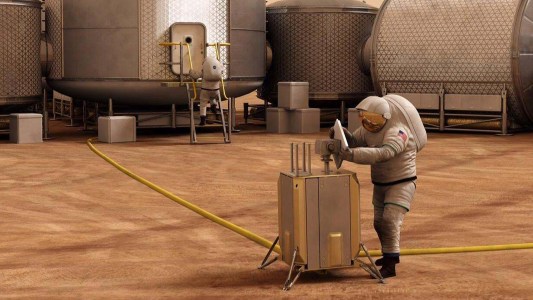 A new study predicts that space radiation alone wouldn’t make missions to Mars too risky for astronauts — as long as we timed them right.