It sounds a little sci-fi, but the danger of surprise pathogens — even if it is very remote — should be obvious enough to all of us now.

What if the Mars samples we want to bring back contain more than just information about our neighbor?

What if they contain not just signs of ancient life but actually living microbes?

What if they caused a pandemic?

To tackle this highly unlikely but still possible scenario, NASA will need to create a lab unlike any currently on Earth, combining the ability of high-level biocontainment labs to keep everything in, and ultra-sterile clean rooms’ ability to keep everything on Earth out.

Contamination — and containment: Even getting the air right inside such a facility is going to be… complex.

To prevent the Mars samples from potentially unleashing a Red Planet plague on Earth, the lab should have negative air pressure — so any leak causes air to rush into the facility, preventing whatever’s in there from leaking out.

But to prevent Earth lifeforms from contaminating our precious Martian rocks — a much more likely, if less risky, scenario — a clean, sterile lab would also need to have a positive air pressure, pushing any microbes, dust, danders, etc. out of the lab, keeping whatever is inside from getting dirty.

Suffice to say, NASA doesn’t have a great real-world model for the world’s most paradoxical HVAC system.

But a team of researchers dubbed NASA Tiger Team RAMA have traveled the world to understand the challenges behind extraterrestrial containment, Sarah Scoles reports for The New York Times.

And it’s possibly not a minute too soon, since such a lab could take a decade or so to build, and Mars samples are hopefully touching down by 2033.

“This will be the first sample return mission from another planet,” NASA Mars sample curator (what a title!) Andrea Harrington told Scoles, and even a remote chance of danger is worthy of taking seriously.

“Because it is not a zero-percent chance, we are doing our due diligence to make sure that there’s no possibility of contamination,” Harrington said.

While the chances of bringing a Martian microbe to Earth are slim, they aren’t zero — and NASA scientists are taking the threat seriously.

Pandora’s locks: It’s an impressive technological achievement, our ability to contain incredibly deadly pathogens like Ebola, Marburg, and even the civilization-killing smallpox, which ostensibly only exists in secure storage at the CDC and in Siberia’s VECTOR laboratory.

All labs have some measure of biosecurity to them, meant to keep dangerous materials as safe as possible. There are four security tiers for labs, which are qualified to handle different levels of pathogen. They are broken up by their biosecurity level (BSL).

BSL-2 labs are the first step up. The little monsters studied here can make you sick if you get accidentally exposed to them. BSL-2 labs need hand and eye washing stations, automatically locking doors, and the ability to decontaminate lab waste. Some level two pathogens include influenza, measles, rabies, and the bacteria which causes plague. Although those last two straddle the lines, sometimes requiring the next level up.

BSL-3 labs can handle stuff capable of killing you and spreading through the air. Researchers in these labs perform work in what are called “biosafety cabinets,” which resemble what Homer Simpson is working in during The Simpsons’ opening credits and are kind of like mini high-security labs themselves. They need two sets of self-closing doors, sealed windows and walls, and a ventilation system with filters, with all of that air flowing in. Monkeypox and yellow fever virus are BSL-3 pathogens.

BSL-4 labs handle the most dangerous disease-causing agents on Earth — or, potentially, Mars. These microbial maximum security prisons have all the safety features of the above, and are ensconced in special isolated zones of existing buildings or stand on their own. Some BSL-4 labs are designed to be used with full-body, air-supplied suits — when you picture a dangerous virus being handled in those fearful-looking hazmat suits, you’re picturing a BSL-4 lab.

Handling Mars samples safely: Because we would be completely unfamiliar with any potential pathogen coming from the Red Planet, Tiger Team RAMA believes BSL-4 precautions are required.

“There are significant unknowns with respect to the biological potential,” John Rummel, a former NASA planetary protection officer (another great title!) told the NYT’s Scoles. “A place like Mars is a planet. We don’t know how it works.”

To gather information on BSL-4 labs, Tiger Team RAMA visited some of the most security facilities on Earth, including the CDC’s Building 18 and the Fort Detrick facilities of the U.S. Army Medical Research Institute of Infectious Diseases (USAMRIID).

That’s only half the equation, though. To figure out how to keep the Earth from contaminating the Mars samples, the team visited ultra-clean space labs in Japan and Europe, Scoles reported.

One of the major challenges they outlined was the air flow problem; you’ve got a lab that needs to be able to do two opposite things. A Mars sample BSL-4 lab would be the only one to try to be both biosecure and ultra-clean at this scale — no one’s ever needed a lab to do that before.

“We’re not surprised that this doesn’t exist,” Harrington told Scoles.

Back to Apollo: While NASA hasn’t built a Martian rock containment facility before, it isn’t the agency’s first go-round with protecting us from potential alien pathogens.

When Apollo’s astronauts returned to Earth, they immediately donned “biological isolation garments” and were then escorted to a Mobile Quarantine Facility aboard the USS Hornet, which plucked them from the Pacific.

Eventually they and their moon material would stay at the Lunar Receiving Laboratory in Houston, which operated as a quarantine facility. After a few Apollo missions, scientists felt safe enough in declaring the moon not to be a threat, and the astronaut quarantine procedures were dropped by Apollo 14.

A Mars sample containment lab would be the only one to try to be both biosecure and ultra-clean at this scale — no one’s ever needed a lab to do that before.

But even though lunar pathogens proved to be a non-issue, the possibility of microbial life surviving the harsh conditions of space has been proven. When the Apollo 12 crew brought the Surveyor III spacecraft back from the moon, Earth bacteria was found to be alive and well in its camera housing.

It’s a reminder that the risk, even if remote, is possible — and why Tiger Team RAMA has begun to think about how to contain it a decade ahead of time.

“We have to treat those samples as if they contain hazardous biological materials,” Nick Benardini, NASA’s planetary protection officer, told Scoles. 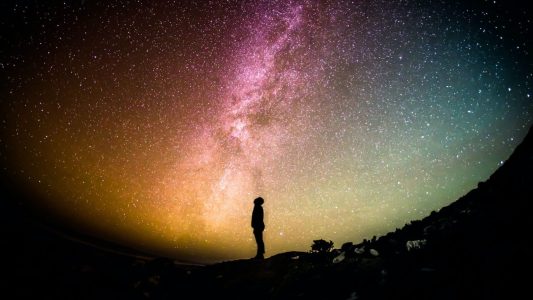 From here to the limits of what we can see, here’s a breathtaking illustrated logarithmic view of the Universe.

Outer Space
This logarithmic view of the Universe will blow your mind
By Ethan Siegel
Subscribe to Freethink for more great stories
Subscription Center
Sections
Video
Freethink
Subscribe
We focus on solutions: the smartest people, the biggest ideas, and the most ground breaking technology shaping our future.
Subscribe