MIRA, a working surgical robot, is heading to the International Space Station (ISS) — and if it performs well during testing, it might one day save astronauts’ lives on the moon or Mars.

The challenge: If an astronaut aboard the ISS has a medical emergency, they can use a capsule to return to Earth in less than six hours — not exactly as fast as an ambulance might get you to the hospital, but quick enough to, say, avoid a ruptured appendix.

Astronauts on Mars won’t have that luxury. The 34 million mile-long journey from the Red Planet to Earth is likely to take about 9 months — and that’s only if the planets are in the right alignment at the time of departure.

With a speedy evacuation out of the question, the only option left is to treat the injured or ill astronaut on Mars. But even if one of their fellow astronauts is a physician, there’s a good chance they won’t be specialized in whatever surgery is needed.

MIRA surgical robot: The answer to this problem may be MIRA, a tiny surgical robot invented by Shane Farritor, a professor of engineering at the University of Nebraska-Lincoln.

MIRA can be controlled remotely, which means NASA could find a doctor specialized in whatever ails an astronaut on Mars and have that person conduct a surgery from Earth. It also weighs just two pounds, so sending it to Mars wouldn’t dramatically increase mission costs.

Space test: NASA plans to send a MIRA surgical robot to the ISS for testing in 2024. Once onboard the space station, the bot will autonomously perform simulated surgical actions — snipping stretched rubber bands and sliding metal rings along a wire.

By having the bot perform these actions autonomously, Farritor’s team can test the robot’s performance in microgravity without monopolizing astronauts’ time or communications systems.

“The astronaut flips a switch, the process starts and the robot does its work by itself,” Farritor said. “Two hours later, the astronaut switches it off and it’s done.”

Delayed gratification: It’s not clear how the MIRA robot would overcome the current communication delay between Earth and Mars during a surgery — depending on the planets’ alignment, it takes 5 to 20 minutes for radio signals to travel between them.

Farritor does anticipate the robot being able to perform surgeries autonomously 50 to 100 years from now, though, so NASA could be thinking more long term about the bot’s potential to help astronauts on Mars and beyond.

Looking ahead: As valuable as the MIRA surgical robot might one day be to astronauts, it’s making an impact on Earth today, helping doctors perform successful surgeries in an ongoing clinical trial.

If Farritor’s team can secure regulatory approval for MIRA, the robot could one day be used in hospitals around the globe, making it possible for doctors to perform surgeries on people thousands of miles away.

“MIRA continues to push the boundaries of what’s possible in [robotic-assisted surgery], and we are pleased with its performance so far during clinical trials,” said Farritor. “We’re excited to take it a step further and help identify what could be possible in the future as space travel is becoming more of a reality for mankind.” 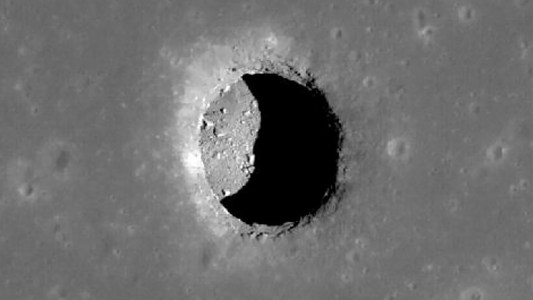 A newly identified lunar pit where the temperature is always about 63 F could be the perfect place for NASA’s future moon base.

Aerospace
NASA discovers the perfect cave to live in on the moon
By Kristin Houser
Subscribe to Freethink for more great stories
Subscription Center
Sections
Video
Freethink
Subscribe
We focus on solutions: the smartest people, the biggest ideas, and the most ground breaking technology shaping our future.
Subscribe