The challenge: Asteroids that come within 30 million miles of Earth are called “near-Earth objects” (NEOs), and if one of them wider than 460 feet were to hit our planet, it could potentially flatten a city.

In 2005, Congress directed NASA to identify at least 90% of these large NEOs by 2020 so that we could track them and, if necessary, take action to try to prevent an impending collision (or at least minimize the devastation).

So far, though, NASA estimates it has only found 40% of these threatening space rocks, and its reliance on ground-based telescopes — which can only operate at night — has been a major limiting factor.

NEO Surveyor: To overcome this limitation, NASA is developing NEO Surveyor, a spacecraft designed to search the sky for unidentified NEOs from a spot in space between the Earth and the sun.

“By searching for NEOs closer to the direction of the sun, NEO Surveyor would help astronomers discover impact hazards that could approach Earth from the daytime sky,” Amy Mainzer, survey director for NEO Surveyor at the University of Arizona, said in 2021.

(Almost) ready to launch: On December 6, NASA announced that NEO Surveyor had passed a key technical review and could move forward to the next stage of development.

The space agency also announced that it aims to launch the spacecraft no later than June 2028 and that the baseline cost for the mission has grown to $1.2 billion — as recently as 2019, NASA expected to be ready to launch by 2025 and didn’t think the mission would cost more than $600 million.

The big picture: NEO Surveyor might be more expensive than anticipated, but once in space, it is expected to bring the total number of identified threatening NEOs up to 66% within 5 years and allow NASA to meet the 90% goal within a decade.

In the meantime, NASA will continue to collect data on 2022’s Double Asteroid Redirection Test, which slammed a spacecraft into a (non-threatening) asteroid 6.8 million miles away in an attempt to change its trajectory — an ability that could come in handy if NEO Surveyor discovers a space rock on a collision course with our planet. 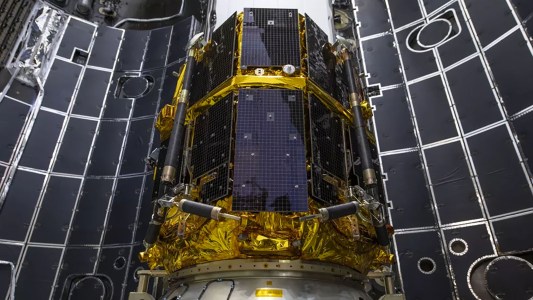 A lunar lander built by Japanese aerospace startup ispace is poised to be the first private spacecraft to soft land on the moon.