Boeing’s Starliner capsule is finally on its way to the International Space Station (ISS) — two and a half years after its first uncrewed flight test ended in failure.

If this trip is a success, NASA will be closer to having a second American-based spaceship.

Commercial Crew: After the Space Shuttle was retired, from 2011 until 2020, the only way for NASA astronauts to reach the ISS was by hitching a ride aboard a Russian rocket at a cost of about $80 million per seat.

To end that reliance on Russia, NASA launched the Commercial Crew Program in 2010 by giving five private US aerospace companies, including Boeing and SpaceX, a total of $50 million to start developing a passenger space capsule.

NASA’s hope was that it could eventually pay one or more of those companies for rides to the ISS instead of Russia, presumably at a much lower cost and without the concern that political tension might interfere with space station operations.

Boeing’s first attempt at an orbital flight test never made it to the ISS.

The frontrunners: In 2014, NASA gave Boeing and SpaceX billion-dollar contracts to further develop their capsules (Starliner and Crew Dragon, respectively), and since 2020, Crew Dragon has carried astronauts to the ISS five times.

Starliner has yet to successfully complete a test flight, though. In December 2019, Boeing’s first attempt at an orbital flight test (OFT) never made it to the ISS due to multiple software errors, including one that could’ve caused the spacecraft to blow up.

A second attempt at an uncrewed test flight was scheduled for August 2021, but the rocket carrying Starliner never left the ground — after the countdown had already commenced, issues with the capsule’s propulsion system were discovered.

Third time’s the charm? On May 19 at 6:54 p.m. ET, a rocket carrying a revamped (but still uncrewed) Starliner lifted off from Florida’s Cape Canaveral Space Force Station. At the time of writing, everything is looking good for an ISS docking around 7:10 p.m ET on May 20.

Starliner is then expected to spend 4 to 5 days at the ISS, during which time astronauts will retrieve 500 pounds of NASA cargo and supplies from the capsule. It will then detach and return to Earth for a parachute-assisted desert landing in the western US.

Flawed flight: The Starliner launch wasn’t perfect. About a half hour after liftoff, one of the capsule’s thrusters didn’t fire as expected, and its backup failed, too. The backup’s backup worked as hoped, and the capsule’s journey wasn’t affected.

“The system is designed to be redundant, and it performed like it was supposed to,” Mark Nappi, Boeing’s commercial crew program manager, said during a post-launch press conference. “Now the team is working the ‘why’ as to why we had those anomalies occur.”

Looking ahead: Even if everything else with Starliner’s flight goes according to plan, it could be awhile before NASA moves forward with a crewed flight test (CFT) — with SpaceX’s Crew Dragon operational, there’s no need to rush.

“The view that was consistently expressed to us (from NASA) is that the program will proceed to CFT when, and only when, they’re ready,” David West, a member of NASA’s independent safety panel, said on May 12. “Of course, the best path to CFT will be a successful OFT-2.”

“NASA’s Commercial Crew Program and our industry partner, Boeing, today took a major and successful step on the journey to enabling more human spaceflight missions to the International Space Station on American spacecraft from American soil,” said NASA Administrator Bill Nelson. “The OFT-2 mission represents the power of collaboration, which allows us to innovate for the benefit of humanity and inspire the world through discovery.” 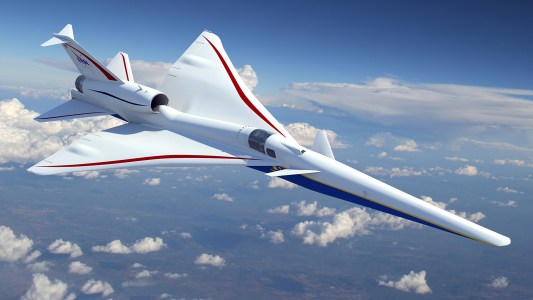 Supersonic flight over land is currently banned in the US, but a plane being built by NASA and Lockheed Martin could rewrite the rules.

Aerospace
NASA is planning to bring back supersonic flight over land
Subscribe to Freethink for more great stories
Subscription Center
Sections
Video
Freethink
Subscribe
We focus on solutions: the smartest people, the biggest ideas, and the most ground breaking technology shaping our future.
Subscribe