A pair of musicians created an algorithm they hope will end a legal nightmare for musicians: the unintentional use of copywritten melodies.

Melodies are the sequences of notes that form the backbone of most popular music — they’re the snippets of a song that get stuck in your head, for better or for worse.

As soon as a musician records a melody or jots it down as sheet music, they legally own it and have the right to sue anyone who uses the melody without permission for copyright infringement.

It doesn’t even matter if the second musician consciously knows that they have copied the melody — they can still be forced to pay money to the melody’s original author, something Katy Perry, George Harrison, and a slew of other musicians have all found out the hard way.

Part of the problem with this setup is that there are only so many notes in music, meaning there is a finite number of melodies.

The number of possible melodies within the range of notes favored by pop musicians — those in the octave above middle C — is even smaller.

Meanwhile, the advent of platforms like Soundcloud has resulted in a dramatic increase in the number of songs potentially containing those melodies.

As a result, musicians are being forced to tip-toe through a minefield of possible copyright violations while writing music — all they can do is hope they don’t step on a melody that someone else has already recorded, lest it land them in court.

The Sound of Computer Science

To address this problem, musicians Damien Riehl and Noah Rubin came up with a radical idea: record every possible melody within the pop music range and then release it into the public domain.

The algorithm operated at a speed of 300,000 melodies per second.

To that end, the duo — who are also, respectively, a copyright attorney and a computer programmer — built an algorithm that could write every possible 12-beat melody in the middle C octave in MIDI, the protocol computers use to read music.

By the time the algorithm finished, it had written more than 68 billion melodies — at a speed of 300,000 melodies per second.

By simply saving the melodies onto a hard drive, the duo fulfilled the requirement needed to copyright them. After that, they released the melodies into the public domain, creating a website where anyone who wants the melodies can download them for free.

As Riehl pointed out in a recent TEDx Talk on the project, the whole thing could be a violation of copyright laws in and of itself — after all, some of the melodies produced by the algorithm had already been recorded by other artists.

The choice of MIDI for the project, however, might provide a loophole that gets around that — and possibly even usher in an end to litigation over copyrighted melodies altogether.

The key to this is the fact that MIDI records music as numbers — a melody comprising the notes CBABC, for example, reads 12321 in MIDI — and numbers aren’t copyrightable the same way sounds are.

“Under the copyright laws, numbers are facts, and under copyright law, facts either have thin copyright — almost no copyright — or no copyright at all,” Riehl said in his TEDx Talk. “So maybe if these numbers have existed since the beginning of time, and we’re just plucking them out, maybe melodies are just math, which is just facts, which maybe are not copyrightable.”

“Maybe if somebody is suing over a melody alone — not lyrics, not recordings — but just the melody alone, maybe those cases go away,” he continued. “Maybe they get dismissed.” 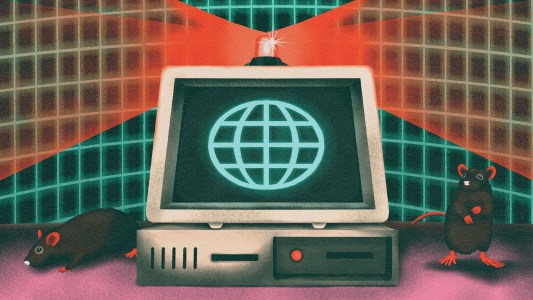 Researchers are using this algorithm to predict which regions are likely to see a zoonotic disease outbreak, and hopefully prevent the next global pandemic.

Virology
Can an algorithm predict the next disease outbreak?
Subscribe to Freethink for more great stories
Subscription Center
Challenges
Video
Freethink
Subscribe
We focus on solutions: the smartest people, the biggest ideas, and the most ground breaking technology shaping our future.
Subscribe