Forget about robots taking our jobs — let’s talk about how they could take our chores.

One day, advanced cleaning robots could be as ubiquitous in homes as vacuums and dishwashers. We’ll be able to relax while they clean our counters, scrub our showers, and do all of the annoying but necessary housework we don’t want to do.

The bots will be just like the Jetsons’ Rosie, we imagine, minus the French maid uniform (probably).

But as much as, well, everyone wants a cleaning robot right now, there might be a real need for them in the future.

Earth faces a rapidly aging population — today, there are ten people under age 65 for every one senior, but by 2050, the United Nations projects, it’ll be just five to one. In some countries, like Japan, it’ll be less than two to one. That means we have a little over one generation to start planning how to support that growing group of seniors in the future.

Japanese automaker Toyota believes home robots could help us meet the challenge by enabling older people to live independently longer — which is why a cleaning robot is currently hanging from the ceiling of a “mock home” in Silicon Valley.

On September 30, Toyota showcased the latest tech to come out of its Toyota Research Institute (TRI), a facility where roboticists and programmers are working to create the home robots of the future.

Part of the challenge is the fact that no two homes are identical — they all have different layouts, furniture, and belongings.

“For us, the reality is for a robot to be successful, (it) has to be able adapt to multiple environments,” Jeremy Ma, co-lead of TRI’s Robotics Fleet Learning Team, told TechRepublic.

That means developing a cleaning robot that can safely move through any house, deftly navigating between furniture and avoiding obstacles — or…it means hanging the bot from the ceiling.

That’s the idea behind the TRI’s ceiling-dwelling “gantry robot” prototype. When not in use, the robot is tucked away up above. Then, when needed, it drops down to wipe counters, clear clutter, and load the dishwasher.

Not only does this eliminate the navigation problem, it also addresses the issue of storage.

“Many homes, especially those in Japan, are very small and cluttered and have no room for a floor dwelling robot…so we decided to explore a robot that could take advantage of space above,” Dan Helmick, co-lead of TRI’s Robotics Fleet Learning Team, said during the virtual presentation.

The TRI researchers don’t expect anyone to actually hang this cleaning robot in their home — retrofitting a kitchen to support such a bot would likely be very expensive.

The idea is that new homes could be designed with the robot (or the infrastructure for it) built right in, making them available to the aging population of the future.

For now, though, the gantry robot is just a prototype, as are the other bots under development at the TRI’s mock home.

But by giving us a look into the work going on at the facility, Toyota may have just opened up a window into the future — one where we can kick back after dinner, while a robot descends from the ceiling like Spiderman to take care of the dishes. 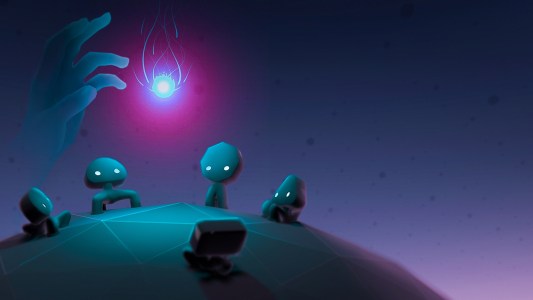 In the new VR movie “Agence,” artificially intelligent characters respond to the actions of the viewer in unpredictable ways.

VR
New VR movie lets you play god to a planet of AIs
Subscribe to Freethink for more great stories
Subscription Center
Challenges
Video
Freethink
Subscribe
We focus on solutions: the smartest people, the biggest ideas, and the most ground breaking technology shaping our future.
Subscribe