The challenge: For a new car to be approved for street use in the U.S., it must meet the NHTSA’s Federal Motor Vehicle Safety Standards, and those require that all production vehicles have certain features, including steering wheels and pedals.

Manual controls aren’t necessary in fully autonomous vehicles, but due to the decades-old rules, developers of driverless cars have had to include them anyway. That’s made the cars more complicated and expensive than they might need to be, while also limiting design innovation.

What’s new? The NHTSA has now updated the standards to eliminate the requirement for cars designed solely for autonomous driving to have manual controls, deeming them “logically unnecessary.”

The update also clarifies how manufacturers should apply the standards when developing driverless cars, specifically.

“As the driver changes from a person to a machine in [automated driving system]-equipped vehicles, the need to keep the humans safe remains the same and must be integrated from the beginning,” NHTSA Deputy Administrator Steven Cliff said.

“With this rule, we ensure that manufacturers put safety first,” he continued.

In the queue: Automakers haven’t waited for the NHTSA ruling to start designing driverless cars without steering wheels and other manual controls.

General Motors (GM) and self-driving car company Cruise have already developed such a vehicle — the Cruise Origin — and are prepared to begin manufacturing it before the end of 2022.

Amazon subsidiary Zoox has also developed a similar car design as the Cruise: a large cabin with two rows of seats facing the center of the vehicle and sliding doors on the side through which passengers enter.

The big picture: Before any of these driverless cars can be cleared for roads, they need to prove that they can operate autonomously in at least certain conditions without any help from a driver.

Driverless cars with those capabilities (and steering wheels) are already on the road in certain areas, and their widespread deployment could make our streets safer by eliminating one source of human error, which plays a key role in most traffic accidents. 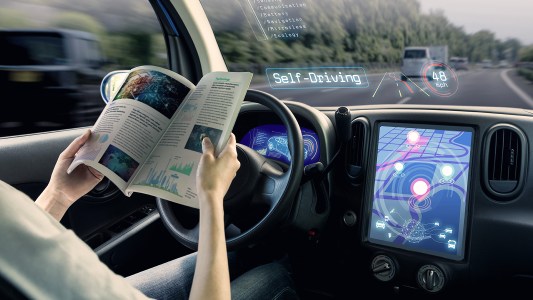 An Oculus exec has publicly bet $10,000 that vehicles with Level 5 autonomy will arrive on city streets by 2030.