Forty miles outside Moscow, Katherine Sizov used to feast on apples from her grandparents’ neighbor’s tree. At the dacha, the fruit wouldn’t go to waste; everything plucked was consumed.

But today, in the United States, where she was born the child of Soviet immigrants, this direct connection to food is rare.

“I kind of realized, I don’t know where most of the food I eat comes from,” Sizov told the Washington Post. “I thought it came from the grocery store.”

While researching for her studies at UPenn, the then-student came across a page detailing the impact of food waste on climate change.

Sizov took her scientific and technological interests and applied them in a bid to ensure we eat what we grow. The result was a sensor that measures ethylene gas, which fruit emits as it ripens.

The sensors, created by her startup Strella Biotechnology, measure the ethylene gas levels in the vast storage rooms where millions of fruit await delivery in a kind of suspended animation — rooms free of oxygen, where a person could pass out in a single breath, WaPo noted.

Using the sensors, “we can tell two months in advance of the fruit spoiling in there that it’s going to do so,” Sizov told Axios, and they’ve been able to reduce food waste on their big box clients’ shelves “by up to 50%.”

Ripe for issues: Food waste is a problem that extends beyond cost and hunger, with global implications for climate change and the security of the food system.

About a third of the food produced around the world ultimately goes to waste, representing 30% of our agricultural land and generating 3.3 billion tons of carbon dioxide in its production, according to waste management consulting firm RTS.

And when the wasted food finally reaches the landfill, it still does damage, generating methane, an even more potent greenhouse gas than CO2.

The USDA has identified ten different kinds of produce that contribute the most to food waste, Axios reported, including pears, mangos, kiwis, bananas, and apples.

A million-dollar guessing game: After produce has been harvested, it may be kept in massive storage rooms, where it awaits offseason unloading. (This is one reason why you can buy produce year-round.)

But once they hit those warehouses, the fruit are essentially locked up in a black box. To keep them from ripening — and rotting — the air within the rooms is deoxygenated.

The sensors measure the levels of ethylene gas — which fruits emit while ripening — in the vast storage rooms where millions of fruit await delivery in a kind of suspended animation.

While this slows the fruits’ aging, it also makes them difficult to monitor; any open door sends oxygen rushing in, and the very atmosphere of the storage rooms is dangerous to workers.

Packers are stuck “playing a little bit of a game show game, where it’s like, ‘behind which door is the right produce?’” Sizov told Axios.

Which is where Strella’s sensor is meant to come in. Fruit like apples give off ethylene gas as they sweeten; once they hit the perfect ripeness, the gas levels off.

If they know where in the ripening process the fruits are, packers can ship them off at just the right time to not only avoid them rotting in the warehouse, but also reach customers at their peak.

“Last year I did some rooms, and I had some Gala rooms that it accurately predicted had some problems, and I didn’t want to believe it,” Leighton Rice, the quality manager at Rice Fruit, told WaPo.

“But when I opened it up, sure enough, there were a lot of problems. That was approaching a million dollars in losses that could have been avoided.”

What’s next: Strella has already begun working with half of the apple and pear packers in the US, Axios reported, and has garnered some big backers — including Mark Cuban. Not everyone agrees ethylene gas is key, however.

With apples and pears already under their aegis, Strella is about to begin working with kiwi sellers from Australia and New Zealand, and may bring the tech to retailers, not just packers. They’re also aiming to tackle perhaps the most frustrating fruit of them all: the avocado.

“You end up spending two bucks apiece for a whole bag,” Sizov told Axios, “and then half of them go bad before you even put them away.”

Biology
Inspired by kombucha tea, engineers create living materials
A symbiotic culture of specialized yeast and bacteria can generate tough materials able to perform a variety of functions.
Up Next 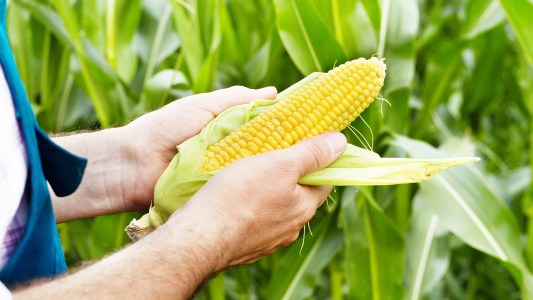 Using CRISPR to knock out a single gene in corn and rice increased crop yields by up to 10% in field trials.

Agriculture
Silencing one gene with CRISPR boosts crop yields by 10%
Subscribe to Freethink for more great stories
Subscription Center
Challenges
Video
Freethink
Subscribe
We focus on solutions: the smartest people, the biggest ideas, and the most ground breaking technology shaping our future.
Subscribe