You might remember the Pokemon Go craze of 2016: people spent hours hunting fictional creatures through their neighborhoods while staring at their phones. Augmented reality (AR) technology was an integral part of that experience, which placed cute Pokemon characters into a player’s real-world surroundings.

Since then, AR has made more appearances in the mobile and mainstream game world. Social media apps like Snapchat are using the technology to create immersive experiences like virtual holiday shopping. But beyond entertainment and personal enjoyment, is there a way for AR to benefit society in more profound ways?

A number of startups and organizations are finding innovative ways to adopt AR technology for a wide range of industries. In the near future, we could see this tech shift from a fun gimmick to a highly sought-out tool.

Why it matters: You’ve probably heard AR discussed alongside virtual reality (VR), but it’s important to know the difference between these two types of tech. While VR creates a completely artificial, immersive world that the user can interact with, AR takes artificial elements and superimposes them onto a user’s real-world surroundings.

Lately, VR has made waves in the entertainment and gaming industry, with companies like Oculus, Sony, and HP releasing headsets that offer an immersive gaming experience. But AR’s heyday in gaming isn’t quite here yet.

TechCrunch reported earlier this year that AR is currently going through its “awkward phase,” since some big companies are investing in the technology, but consumers aren’t jumping at the bit to use it yet. Platforms, developers, and even the hardware itself still have a way to go before AR becomes an attractive new phase in interactive entertainment.

However, there are already innovators in several different industries — from retail to medicine to education — who are brainstorming and testing ways that AR could become a transformational tool. And in some sectors, it’s already starting to take off.

Blast off: If you thought the future of AR was limited to Earth, think again. NASA has used both AR and VR to help train astronauts for new missions and keep the International Space Station (ISS) in tip-top shape.

On board the ISS, AR helps astronauts with system upgrades and maintenance. For example, an AR headset can be an astronaut’s second set of eyes during a procedure: It can scan a work zone and suggest directions on what to do next.

The headset wearer can even send a video feed to another device to show team members exactly what they’re seeing. Those team members can place images or icons right in their field of vision in order to give pointers during complicated tasks.

Science on the ISS has also benefited from AR. In July 2021, NASA upgraded its Cold Atom Lab, which observes quantum phenomena from its unique position in Earth’s microgravity. The astronaut who did the task wore a Microsoft HoloLens to help with an especially tough-to-see procedure.

Help is on the way: There’s no time to waste in an emergency situation. And when things are dangerous, first responders have to act as quickly as possible.

A startup called Mojo Vision is creating an AR contact lens that firefighters can wear while on the job. As Fast Company first reported in 2020, the lenses could allow them to see their crewmates or the outlines of objects in a smoke-filled room. They could also check their oxygen tank levels on-the-move, without having to pull out a separate device.

In a similar vein, a startup based in Canada called Longan Vision is developing a visor to attach to a firefighter helmet and assist with search and rescue operations.

“Our technology can actually see through the smoke,” Longan CEO Enzo Jia told IEEE Spectrum. “It can give firefighters super vision, tell them where there’s a victim and where they can go past an object without bumping into it.”

Doctor, doctor: AR-assisted surgery is a new frontier for medicine, and doctors have been able to carry out a number of procedures without a hitch.

Earlier in 2021, doctors performed the first AR-assisted knee surgery in the U.S. In other cases, there have been successful operations on patient’s eye sockets and spines. It’s also a helpful tool for training medical students.

AR may actually help make surgeries safer. By superimposing images in their field of vision, surgeons will no longer have to look away from patients to gauge their vital signs or look at other data in the operating room.

Class is in session: Bringing an immersive experience to students isn’t always an easy task for teachers. But AR can help ignite curiosity in the classroom.

Apps that can teach students about everything from anatomy to outer space can be downloaded onto a smartphone or tablet. Some are completely free of cost.

For example, the World Wildlife Fund has an app called Free Rivers that creates a landscape in your living room. It’s a dynamic experience that seeks to show how ecosystems are interconnected.

The best part? Thanks to their widespread availability, AR education apps can be accessed by anyone with a smart device — no tuition required.

Shop til you drop: AR has the power to completely transform the way we shop – and it’s starting to translate into a real tool in the marketplace. The business trends website Analytics Insight reports that the use of AR and VR in retail will grow by 24.8% and be a $17.86 billion market by 2028.

What explains the trend? The Harvard Business Review says that the growth of AR shopping probably boomed due to the COVID-19 pandemic. Before that, it had been on people’s minds, but there wasn’t a real need for it until now.

“I fully expect that interest has since soared as we’ve seen AR shift from being sometimes gimmicky to now solving real pain points for customers, especially amid the pandemic,” writes author Helen Papagiannis for HBR.

AR
Augmented reality will give us superpowers

Aerospace
NASA uses “holoportation” in space for first time
Holoportation tech developed by Microsoft virtually sent a flight surgeon to the ISS to talk to an astronaut.

AR
Immersive technology will revolutionize our daily life
Extended reality technologies are quickly becoming better and cheaper, suggesting they may soon become part of daily life.
Up Next 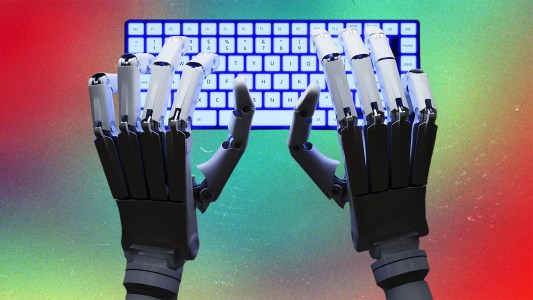 Natural language processing tools are growing increasingly sophisticated, and OpenAI’s GPT-3 just might fool you in a conversation.