Hologram technology is amazing already, but imagine being able to reach out and touch the virtual object — something many of us wished for during the endless lockdowns and late-night Zoom sessions with loved ones.

Touchable holograms could soon be a reality. Researchers at the University of Glasgow have created hologram technology using air jets, called “aerohaptics,” that you can feel.

“In time, this could be developed to allow you to meet a virtual avatar of a colleague on the other side of the world and really feel their handshake,” researcher Ravinder Dahiya wrote in The Conversation.

How it works: The team created an air nozzle that responds to hand motions. It blasts air with the necessary force to simulate touch sensations. Mirrors in the shape of a pyramid project a computer-generated image that seems to float in space. Then, computer software links motion sensors with the air nozzle, guiding it to create the precise air pressure in the right places.

The “basketball” could be convincingly touched, rolled, and bounced.

The team tested their hologram technology by first creating an interactive projection of a basketball. The air pressure was more significant on the user’s fingertips when the ball returned to the hand after a bounce. There was less air pressure when it rolled off the hand. The team found that the “ball” could be convincingly touched, rolled, and bounced, reports Interesting Engineering.

“The touch feedback from air jets from the system is also modulated based on the virtual surface of the basketball, allowing users to feel the rounded shape of the ball as it rolls from their fingertips when they bounce it and the slap in their palm when it returns,” Dahiya explained.

The future of holograms: Dahiya likened his air-jet hologram technology to Star Trek’s holodeck — a fictional hologram where users can physically experience the computer-generated 3D environment. But, he admits, we are far from scifi. The basketball required extensive and complex modeling, and it’s just a sphere — far simpler than most holograms.

Still, the team’s plans are ambitious.

Now that they’ve achieved touch, they are considering adding temperature control to the program so that the projected “objects” will feel cold or hot, like their real-world counterparts. They may even incorporate fragrances.

Dahiya says that, in the future, this hologram technology could overtake heavy haptic suits for immersive video gaming. People could also use it in virtual meetings or medical applications, where doctors can work with a simulation before directly treating the patient. 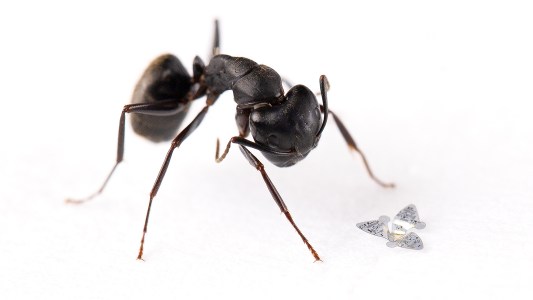 Scientists have built the smallest artificial flying structures yet — gadgets that could one-day monitor air pollution and the spread of airborne diseases.