Quantum computers take advantage of the weird mechanics of the subatomic world to quickly complete calculations that would stump even the most powerful supercomputers.

Today’s machines are still largely experimental, but many experts predict that the quantum computers of tomorrow will have nearly limitless applications, helping us cure diseases, explore the cosmos, and harness the full potential of AI.

The only thing more powerful than a single quantum computer would be a network of them, which is why the development of a quantum internet is also near the top of physicists’ to-do lists.

“In the future, a quantum internet could be used to connect quantum computers located in different places, which would considerably increase their computing power!” physicist Andreas Reiserer said in a news release.

Now, Reiserer and his colleagues at the Max Planck Institute (MPI) of Quantum Optics have developed one essential part of a future quantum internet: a quantum modem.

Modems act as gateways between devices on the internet.

They convert digital data from one computer into signals that can be transmitted via phone lines or cables to other computers. The modem on the receiving end of the transmission then converts the incoming signals back into digital data.

Quantum computers store their data in states of quantum particles called qubits (as opposed to the bits of classical computers), and a quantum internet needs to be able to transfer the data stored in the qubits of one quantum computer to those in another.

There are a few ideas about how to do this, but MPI’s modem uses the massless light particles called photons.

The quantum leap happens 60 times faster than it would otherwise.

Their modem takes the information stored in “stationary” qubits (which are housed within one quantum computer) and transfers it to “flying” qubits made of photons.

These photons can then travel along fiber optic cable networks and into the modem at another quantum computer. There, the information is transferred to stationary qubits.

The key was creating the perfect modem to facilitate this transfer.

To do that, researchers built a cabinet with two parallel mirrors. They then sandwiched a thin piece of crystal containing their stationary qubits between the mirrors.

Finally, they cooled the whole thing to -455.8 degrees Fahrenheit to increase the stability of the stationary qubits.

The mirrors are slightly permeable, so the flying photon qubits are able to enter the cabinet through them, carrying the information.

Once inside, the photons bounce between the mirrors, passing by the stationary qubits so many times they eventually transfer their information to them (called a “quantum leap”).

If the modem was at the computer sending the information, this process would happen in reverse — the stationary qubits would transfer the information to the flying ones, which would then leave the modem.

According to the researchers, this use of mirrors causes the quantum leap to happen 60 times faster than it would otherwise.

The whole system still requires more development, but the fact that it would work with existing fiber optic cable networks could make it easier to implement into the quantum internet of the future — once the computers are ready for it. 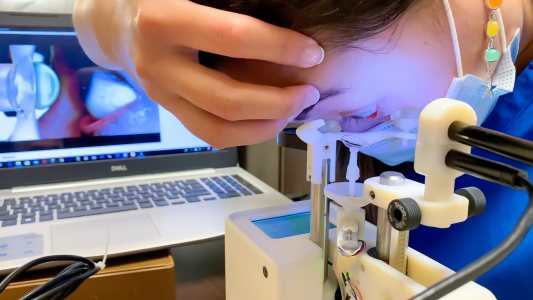 A man in Florida has invented a contact lens robot to insert or extract lenses for people with hand tremors or dexterity issues.

Robotics
This robot will put your contact lenses in for you
Subscribe to Freethink for more great stories
Subscription Center
Challenges
Video
Freethink
Subscribe
We focus on solutions: the smartest people, the biggest ideas, and the most ground breaking technology shaping our future.
Subscribe