Picture this: you’re driving toward a deserted four-way intersection. The stoplight ahead is red, but it turns green before you even have to tap your brakes.

Normally, you could chalk this up to fortuitous timing — most traffic lights are programmed to automatically change color after so many seconds — but this was no fluke.

This intersection is in one of the U.S. cities currently testing smart traffic lights: ones that use AI-powered sensors and software to determine when to switch colors.

Though still in the early stages of development, these next-gen stoplights could be the answer to problems beyond inconvenienced drivers, too.

Being stuck at a red light with no cross traffic wastes fuel, which costs drivers money. Idling cars are bad for the environment, generating about 30 million tons of CO2 emissions in the U.S. annually.

Timer-based stoplights can cause traffic jams that delay ambulances, police, and other emergency responders, and they don’t take into account the flow of non-vehicle traffic on streets, such as cyclists and pedestrians.

California startup NoTraffic believes its smart traffic lights can overcome all of these problems.

The sensors are placed so that they can monitor all of the traffic — vehicles, bikes, and pedestrians — approaching the intersection. Using a combination of machine vision and radar tech, they classify each approaching vehicle (car, bus, ambulance, etc.) and monitor its speed.

The sensors feed this data to the optimization engine, a device that resembles an external hard drive.

NoTraffic’s optimization engine is designed to work with existing traffic control systems, so the company just needs to install it within the large box containing that equipment. These boxes are known as “traffic signal control cabinets,” and they’re already a fixture of most U.S. intersections.

Armed with the data from the sensors, the optimization engine makes real-time adjustments to the intersection’s stoplights to optimize the flow of traffic, prioritizing emergency vehicles and pedestrians.

NoTraffic has conducted pilot studies of its system in several U.S. cities. In those tests, the tech reportedly cut delays by 2,700 hours and reduced carbon emissions by 33 tons per intersection annually.

NoTraffic has now partnered with the city of Phoenix, Arizona, for another test, which could lead to a wider roll out in the future.

NoTraffic’s website doesn’t specify the cost of the system, which makes it hard to say just how feasible it would be to make all 300,000 traffic lights in the U.S. “smart.”

But if the tech takes off, it could be a straightforward way to address both the nation’s carbon emissions and the wasted time spent sitting in idling cars. 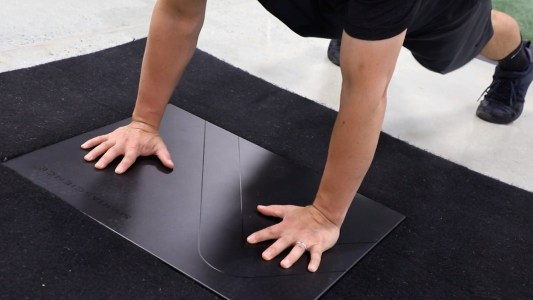 Sparta Science has developed an AI-powered force plate system that prevents injuries among athletes and soldiers by predicting their likelihood.