YouTuber Lucas VRTech has designed and built a pair of finger-tracking VR gloves using just $22 in materials — and he’s released all the details on the build so others can make their own.

The challenge: We use our hands to manipulate objects in the real world, but in VR, users typically have to use controllers with buttons and joysticks.

That breaks some of the immersion, limiting the use of VR for not only gaming, but also applications like therapy and job training.

There are VR gloves that eliminate the need for handheld controllers — they provide haptic feedback, meaning when a user grasps a digital object, they actually feel it in their hand.

However, those can cost hundreds or even thousands of dollars. Some developers don’t even make their prices public — they just ask businesses to contact them for quotes.

DIY VR gloves: In a new video, Lucas explains that he wanted a pair of VR gloves, so he decided to see if he could build a pair on the cheap.

“This started as just a fun project for me to work on by myself, but now it’s become a mission for me to help make VR haptic gloves affordable for the average consumer,” he explained.

In the video, he details how he used a 3D printer, a tiny Arduino computer, cheap retractable ID badge reels, and other accessible, affordable materials to build the hardware for the VR gloves.

He then collaborated with a fellow Discord user, danwillm, to develop the software needed to translate the data from the gloves into a virtual hand.

DIY means DIY: This doesn’t mean you can just order a pair of $22 VR gloves. “As a student, I’m not really in a position that I can actually sell these gloves right now,” Lucas said.

However, you can buy the materials and build them for yourself.

It’s become a mission for me to help make VR haptic gloves affordable for the average consumer.

Lucas has released the files for all the 3D-printed parts, as well as the code needed to actually use the gloves in VR. He’s posted resources on GitHub to help people with the build and plans to create YouTube tutorials, too.

Fourth prototype forthcoming: Lucas said he’s going to continue developing the VR gloves. His goal for the fourth prototype is to incorporate Bluetooth — that’ll eliminate the wires currently tethering users to their PCs.

He also plans to give the gloves force-feedback haptics — that means when you pick something up in VR, the gloves will automatically stop your fingers from moving when they come into “contact” with the virtual object. 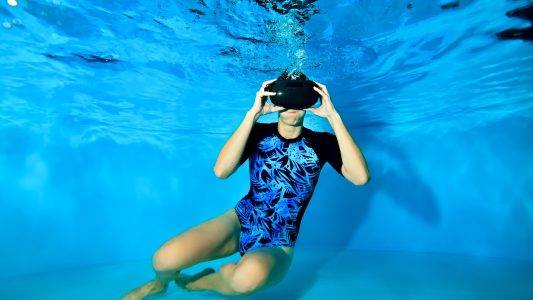 Cybersickness is similar to motion sickness, but it comes from using electronic screens like virtual reality. A new study shows that aquatic VR could be the cure.