AI artist Botto has just made over a million dollars for NFTs of its work.

Botto, which works in collaboration with a human community, hit the million dollar mark within five weeks of putting a batch of NFT-backed artwork up for auction, Euronews reported.

The haul elevates the AI artist into a small-but-growing cohort of synthetic creators, and the designer behind Botto, German artist Mario Klingemann, told Euronews that he believes Botto’s practice could eventually extend to books and music.

It could foretell a new way to create, with humans and AI working together.

A human and AI artist collaboration: Botto’s practice could signal a new way for humans and AI to work together. While Botto’s a bit of a dork — Euronew cites its favorite artist as Leonardo da Vinci, which, like, come on — it does have a unique advantage for itself: it can learn about art history really fast, as New Atlas’ Loz Blain pointed out.

Botto, which works in collaboration with a human community, hit the million dollar mark within five weeks of putting a batch of NFT-backed artwork up for auction.

The AI artist uses that capability to bolster its practice, which begins with words.

“Botto creates a sentence, feeds that into a neuro network and gets an image back,” Klingemann told Euronews. “And that neuro network has seen more art, more images, than any single human being around.”

Botto shows 350 works a week to its community, who have all bought in to the AI artist’s cryptocurrency, BOTTO; every week, one work is minted as an NFT. The community then votes on their favorites, and this is feedback that Botto incorporates into future works.

“All the votes from the community go back to the artificial intelligence which tries to develop a sense of taste,” Klingemann said. “So it looks at the fragments it creates and then tries to determine whether the audience will like this or will they hate it.”

Rise of the robotic artists: Botto isn’t the first AI artist to make a splash in the art world; in fact, there’s a surprisingly rich history of computer sciences and the arts intermingling.

Famed Victorian mathematician Ada Lovelace first thought of taking computers beyond mathematics at a time when they were only the “Analytical Engine” was thought of essentially as a Tim Taylor-souped up abacus. Her vision, which she dubbed “poetical science” — fitting for the daughter of Lord Byron! — was seen as a revolutionary approach, a horizon-expanding moment.

Per AIArtists.org, painter Harold Cohen began collaborating with a computer program called AARON in 1976, perhaps the first instance of what we would consider an AI artist. (If that timeline surprises you, consider that many of the machine learning algorithms we use today were dreamed up in the 1950s; we just needed the horsepower.) Closer to the present, the Painting Fool, which creates collages based on keywords it plucks from news articles and painted portraits of Parisian art patrons, debuted in 2013.

More recently, robotic artists have become the toast of the tech and art world; Sophia and Ai-Da command media attention and price tags in the millions. And their economic impact seems to be growing along with the NFT market.

A creative future: Botto could come to represent a new way for humans and AI to work together, sort of a “living” paintbrush or collage. “How will we be able to make a living if machines take over our creative jobs?” Klingemann asks in a press release; Botto is his answer.

It’s an approach that could catch on beyond the NFT and AI communities. The AI artist is also showing in a more traditional format: Art Basel Miami, the place to see and be seen in American art. 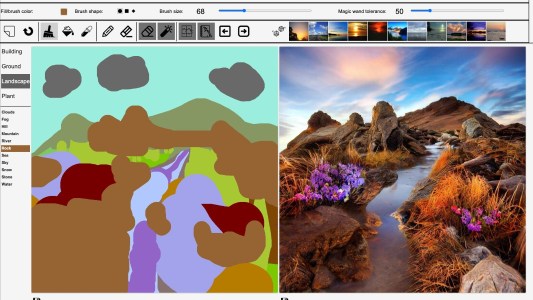