Facial recognition software continues to proliferate. London’s Metropolitan Police recently announced a real-time facial recognition system for its CCTV camera network. China also uses the technology to enhance what may well be the world’s most sweeping surveillance state (including to track, locate, and intern Uighar Muslims).

But elsewhere, privacy concerns have led to a growing anti-facial recognition movement. The city of San Francisco took the opposite tack, banning facial recognition use by the police department and other city agencies.

A paper bag would stop this kind of mass surveillance tech. But that’s not practical, and masks are often illegal to wear in some places, like banks. So artists and fashion designers have taken to coming up with creative ways to attempt to fool facial recognition. Here’s a sampling of the anti-facial recognition privacy collection. But (spoiler alert) most of this stuff wouldn’t even fool your iPhone.

This is probably the most well-known method of how to beat facial recognition, featured in The Atlantic and Vogue, among other places. Developed by artist Adam Harvey, CV Dazzle uses dramatic makeup and dynamic hairstyles to fracture the facial features used by some algorithms. In London, a city covered in cameras, the Dazzle Club art collective puts on the makeup and walks routes planned by the artists.

The idea is to provoke conversation about what we expect from our public spaces and life under surveillance, says Anna Hart, co-director of public art collective AiR and a member of Dazzle Club.

“Just kind of gently provoking conversation about what this stuff is, what matters to us in a city,” Hart says. “And it all comes from being this strange condition we find ourselves in, exploring hiding by making ourselves more visible.”

And visible is right — this stuff is obvious, making it not a great choice for eluding Big Brother.

HyperFace: How to beat facial recognition by giving them what they want

Created by Hyphen Labs, in collaboration with Adam Harvey, HyperFace uses the opposite approach to CV Dazzle. HyperFace does not trick the algorithm into not seeing a face. Instead, it gives it too many faces.

The patterns on HyperFace anti-facial recognition clothing — which resemble the odd, pixelated shading used in Minecraft — take advantage of the algorithm by showing it many false faces. It reduces the algorithm’s confidence in identifying your face by giving it many other potential visages to be confused by.

Dazzle and printed fabrics won’t beat your iPhone. That’s because some facial recognition tech uses infrared (not visible) light to recognize you. By projecting an infrared dot mapping grid, these algorithms create a 3D model of your face, like a topographical map made by radar. It doesn’t care what color makeup you have, or if there’s 2D faces printed on your shirt.

But you can fight infrared with infrared. A team of researchers at Chinese retail giant Alibaba, the Chinese University of Hong Kong, Fudan University, and Indiana University created a ball cap to do just that. The hat projects infrared light in an “adversarial pattern” — an anti-facial recognition design that completely crashes the algorithm.

Similar countermeasures, including Reflectacles, which both bounce back and absorb infrared, are also attempting to fight this much more accurate and complicated facial recognition system.

The key to determining how to beat facial recognition is what kind of facial recognition you are dealing with. Masks are obviously the best; they hide the face completely. But they are conspicuous — not great if you don’t want attention — and illegal to wear in some places. Dazzle makeup and face-camouflaging fashions are useless against infrared. And even the infrared stopping techniques will eventually be challenged by new, different, and better algorithms.

“A lot of them are one off, custom designed, and they fool one specific algorithm,” says Kevin Bowyer, a professor of computer science and engineering at Notre Dame. “Used against any other algorithm, they don’t fool it at all … they’re not a general solution.” 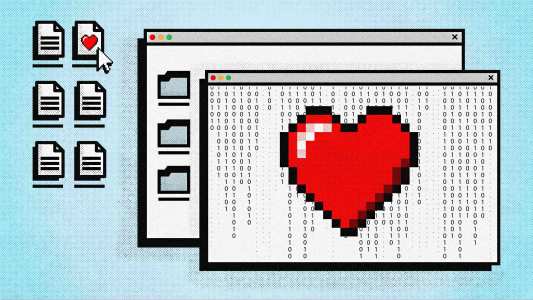 Dating apps are really good at introducing you to lots of people, but they might not be the best way to find a lifelong partner. Can we decode our data to get better results?