UPSIDE Foods (formerly Memphis Meats) has opened what it claims is the world’s most advanced cultivated meat production facility — and it wants you to stop by.

Cultivated meat: Demand for meat is higher than ever, but the process of raising and slaughtering livestock is bad for the environment (and arguably unethical), so transitioning away from it has a lot of upsides.

Most people really enjoy eating meat, though, and plant-based alternatives can’t quite replicate its taste and texture — but cultivated meat, advocates say, is the real deal.

“EPIC will enable neighbors and the public to see first-hand how cultivated meat is made.”

Also known as “lab-grown meat” or “cultured meat,” this food is molecularly identical to meat from animals — the difference is that it’s grown from cells in machines called “bioreactors,” rather than growing and slaughtering livestock.

While that process might impress some people (wow, science!), others are hesitant to put “frankenmeat” on their plates. To make an impact beyond the culinary fringes, the cultivated meat industry will need to earn public trust and approval.

An EPIC facility: To win over mainstream consumers, UPSIDE is pulling back the curtain on cultivated meat, offering tours of its newly opened facility (modestly named the “Engineering, Production, and Innovation Center,” or EPIC) in California.

“Located in an urban area filled with residences and restaurants, [EPIC] establishes meat production as a proud part of the community and will enable neighbors and the public to see first-hand how cultivated meat is made,” the company wrote in a press release.

The company says EPIC is the world’s most advanced cultivated meat production facility. It can produce ground or whole cuts of any meat, poultry, or seafood species, with a maximum capacity of 400,000 pounds of meat annually.

The facility has a kitchen where visitors can taste cultivated meat and watch it being cooked, and UPSIDE says it plans to begin offering consumer tours in January 2022.

Looking ahead: UPSIDE might have a place to produce its cultivated meat and a plan to get people to want to eat it, but what it still lacks is permission to actually sell the products.

In fact, so far, no one has regulatory approval to sell cultivated meat in the U.S. The only place you can buy it is Singapore, and even there, only one product — lab-grown chicken meat — has been approved.

Still, that might be enough to encourage the U.S. and other countries to start giving cultivated meat products the green light.

“I’d say that until 2020, cell-based meat was up in the air, maybe a fantasy and not a commercial reality,” Harini Venkataraman, author of a recent report on the regulatory state of cultivated meat, told Food Business News.

“What happened with Singapore’s approval,” he continued, “is that it opened the doors for other countries to really think about it and start looking at the commercial angle.”

UPSIDE is undoubtedly one of the leaders in the space — it’s been around since 2015 and has the backing of such big names as Bill Gates, Richard Branson, and Tyson Foods — so it might not be long before its cultivated meat could be on your plate.

But if you’re still not ready to bite by then, you could always plan an EPIC tour. 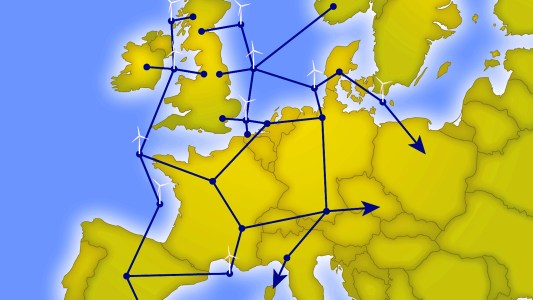 Europe is creating a supergrid across regions, countries, and oceans to smooth out the fluctuations in energy suppliers — and hopefully build more resilient power systems.