John McEnroe has faced off with his toughest opponent — himself.

And no, not in a “controlling his temper” kind of way.

Using machine learning AI, a wall of fog, and advanced robotic tennis-ball-blasting cannons, McEnroe took on past versions of himself.

The matches, sponsored by Michelob and created by Unit9, will air — at some point, TBD — on ESPN+. They’re a blending of AI-powered fantasy and reality that James Medcraft, Unit9’s technical director, told SportsTechie is “sports technology in theatre.’’

Using machine learning AI, a wall of fog, and advanced robotic tennis-ball-blasting cannons, McEnroe took on past versions of himself.

You’ve got to be kidding me: The event, when it airs, will see McEnroe playing five versions of his past self, spanning from his first flashes of brilliance to the end of his career.

“He’s going to play his 1979 avatar – that’s when he came into the tennis circuit,” Michelob VP of marketing Ricardo Marques told TechCrunch.

“Then we have ‘81, when he reached the top for the first time in his career. 1982 was not a great year for John as he was struggling a bit. Then he comes back in full force in 1984 before retiring in 1992,” Marques said.

To create the chimerical matches, Unit9 first used motion capture technology to capture modern McEnroe’s movements, SportsTechie reported, from forehands to frowns. Then, hundreds of hours of McEnroe footage was fed to a machine learning algorithm to train avatars in the way he played, panther-stalked, and even lost his cool on court. Epic’s Unreal Engine MetaHuman finished the job, creating the multiple McEnroes, like a really advanced video game character.

“Playing me, the different me’s, it was technological wizardry,” McEnroe told SportsTechie. “They had the guys all dressed up like me, with a wood racket and everything. And the hair was getting less and less with each guy.”

Smoke and cannons: McEnroe played against his past selves in something close to real time.

The avatars were projected onto a “wall” of fog, allowing McEnroe to see them — although, as TechCrunch noted, they look pretty blurry in the trailer footage for the event.

McEnroe would play tennis against this image, which could track the shots and deliver the appropriate volley, using robotic cannons capable of returning different shots based on what the machine learning algorithm had learned; if 1982 McEnroe would’ve hit back with some topspin, the cannon would do the same.

This was the most difficult part of the match, Medcraft told SportsTechie, due to “the physical synchronization between the robotics and the video game.”

The system didn’t work quite as fast as a human would, a hiccuping style of play SportsTech expects to be smoothed out in editing whenever the match eventually airs.

Beyond the court: Medcraft told SportsTechie that the all-McEnroe match is just the beginning; he envisions the technology also being able to create other fantastical experiences, like golfing or cycling on an alien world.

AI
Google has not created sentient AI — yet
Google can make AI seem sentient, but the AI has no understanding of what it is saying. But humans are easily fooled by conversational AI.
Up Next 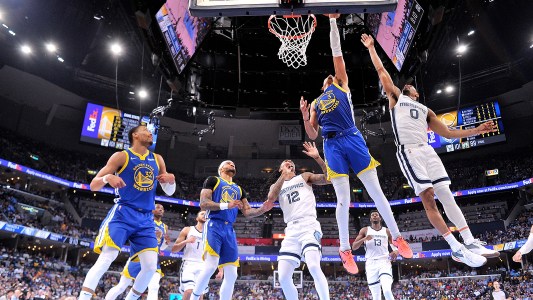 The Warriors are using data in an attempt to deliver the best — and best targeted — fan experience possible.

Sports
The NBA’s Golden State Warriors use data to optimize the fan experience
Subscribe to Freethink for more great stories
Subscription Center
Challenges
Video
Freethink
Subscribe
We focus on solutions: the smartest people, the biggest ideas, and the most ground breaking technology shaping our future.
Subscribe