A record label owned by Universal Music Group (UMG) has just “signed” a band of cartoon primates, and no, it’s not Gorillaz.

This new group has yet to record a single song — but Universal thinks it could represent the next-big-thing in entertainment.

Music in the metaverse: The four members of the new band, KINGSHIP, are non-fungible tokens (NFTs), destined to perform in the metaverse and not on physical stages. If that all sounds totally confusing, let’s recap these concepts.

The metaverse is the expected next evolution of the internet. We don’t know for sure what it’ll end up looking like, but most are anticipating a virtual space that we’ll navigate using VR headsets and digital avatars.

NFTs are also expected to play a key role in the metaverse.

These are unique digital records stored on a blockchain, like cryptocurrency, except each token is unique and indivisible. Each represents a specific digital item (an image, video, etc.), and possessing the NFT for an item means you “own” it — even though countless other people might have an exact copy of the same file, yours is like signed memorabilia.

NFTs have made it possible to create scarcity in the digital art world, and that could allow artists to make a lot more money off their work than they could previously.

Some people have created collections of NFTs. A group of four anonymous creators, working under the banner of Yuga Labs, for example, has created two of the most popular NFT collections: Bored Ape Yacht Club and its spinoff, Mutant Ape Yacht Club.

These collections contain a total of 30,000 cartoon apes, each linked to a unique NFT. After creating the images, Yuga put them up for auction. Some have sold for millions of dollars, and as of November 1, the total value of the two collections was estimated to be about $1 billion (yes, really).

Owners of a Bored or Mutant Ape’s NFT own the intellectual property — the legal right to use its likeness — and collector Jimmy McNeils has teamed up with Celine Joshua, founder of UMG subsidiary label 10:22PM, to create a virtual band, fronted by four of his NFT Apes (three Bored and one Mutant, in case you were wondering).

“This deal is a leading example of how powerful commercial rights are for collectible NFT projects and their collectors,” McNeils said. “I’m incredibly excited to explore this new area of NFT ownership with Celine Joshua and 10:22!”

Making the band: Right now, KINGSHIP is all style, no substance, but 10:22PM plans to build a fully fledged band around these four apes. It’ll give them each a fabricated personality and backstory, and work with musicians to define the band’s sound and record songs.

It’s kind of like the Monkees, but with virtual apes.

“I’d like to see Kingship be one of the main ways the mainstream is introduced to NFTs in the metaverse.”

Eventually, KINGSHIP will perfom its music, and fans will be able to attend performances and other experiences in the metaverse. They’ll also be able to buy NFTs related to the band, and owners of other Bored Apes and Mutant Apes will have early access to all of those goodies.

“I’d like to see Kingship be one of the main ways the mainstream is introduced to NFTs in the metaverse,” McNelis said.

The big picture: UMG is the biggest music company in the world, with nearly 100 record labels under its umbrella. Its “signing” of a band of NFTs destined to perform in the metaverse is yet another sign that the mainstream is ready to buy into Web 3.0.

Whether this band actually ends up being any good remains to be seen — but really, there’s no reason it shouldn’t be. UMG has access to some of the top artists, producers, and musicians in the world, many of whom are likely eager to explore the potential of music in the metaverse.

There’s precedent for virtual artists delivering the goods, too, from the aforementioned Gorillaz to Japanese pop icon Hatsune Miku, so a lack of flesh and bones will be no excuse if KINGSHIP’s performances have fans fleeing to other corners of the metaverse.

Blockchain
Inside the crypto black markets of Argentina
Argentina’s black market for cash is embracing crypto — but it’s not what crypto proponents expected.
By Devon Zuegel

Music
Researchers develop a paper-thin loudspeaker
The flexible, thin-film device has the potential to make any surface into a low-power, high-quality audio source.
By Adam Zewe | MIT News Office

Blockchain
Behind the crypto hype is an ideology of social change
Unlike technology enthusiasts or crypto marketers, “true bitcoiners” didn’t talk about technology, but trust and corruption.
By Rick Wash
Up Next 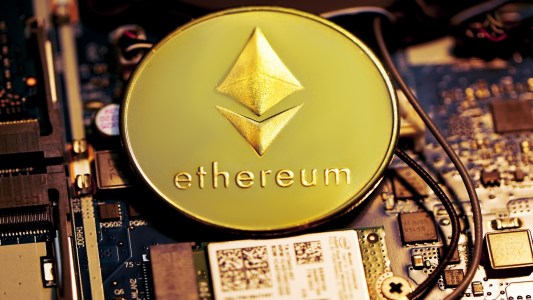 When middlemen are removed, whole new business models and innovations can emerge.

Blockchain
A decentralized web 3.0 could lead to more innovation and privacy controls
By Amanda Winkler
Subscribe to Freethink for more great stories
Subscription Center
Sections
Video
Freethink
Subscribe
We focus on solutions: the smartest people, the biggest ideas, and the most ground breaking technology shaping our future.
Subscribe