A new virtual restaurant will feature a menu inspired by viral TikTok recipes, bringing the most mouthwatering video dishes straight into your home — no cooking talent required.

The challenge: Food videos are incredibly popular on TikTok — clips with the hashtag #TikTokFood have collectively racked up more than 44 billion views — and viral cooking tutorials are inspiring countless people to try whipped coffee, cloud bread, and twisted bacon.

Those recipes each require three ingredients or fewer, but lots of tasty-looking TikTok recipes aren’t so easy to recreate at home.

The idea: TikTok is launching TikTok Kitchen, a virtual restaurant chain that will allow you to enjoy some of the platform’s most popular recipes without hitting up the grocery store or destroying your kitchen.

The initial menu will include smash burgers and baked feta pasta, a dish made popular by creator @feelgoodfoodie, but it will change every quarter to reflect whatever TikTok recipes are currently trending.

How it works: Virtual restaurants don’t have actual brick-and-mortar locations. Instead, they work in the kitchens of existing restaurants to fill online orders, which are delivered via GrubHub, DoorDash, and other apps.

This can give chefs a low-risk way to test out a menu that might not fit their current brand, or offer aspiring entrepreneurs a low-cost way to start their own restaurant. For existing businesses, renting out their kitchen space and staff to prepare food for another restaurateur can provide them with a new source of income.

“You have a platform with a billion viewers monthly who are constantly engaged.”

VDC co-founder Robert Earl told Bloomberg they’ll open 300 U.S. locations in March, but by the end of 2022, he expects more than 1,000 restaurants to be preparing viral TikTok recipes for customers.

“Look, you have a platform with a billion viewers monthly who are constantly engaged, as the numbers show,” he said. “It’s the first time there’s a brand like this out there — an audience of hundreds of millions of people.”

Lingering questions: The launch of TikTok Kitchen is raising some eyebrows, specifically because it’s not clear who is profiting from the virtual restaurants and viral recipes or even who should be.

According to a VDC press release, “proceeds from TikTok Kitchen sales will go to both support the creators who inspired the menu item, and to encourage and assist other creators to express themselves on the platform.”

TikTok spokesperson Elena Saavedra has also told the Verge that “creators will be receiving credit for dishes within the menu and will be featured prominently throughout [the] promotion.”

We don’t know how TikTok will choose which creators to feature, but it’ll probably be a combination of video popularity and their own guess about what works in a food delivery context.

In the case of the uber-popular baked feta pasta, tracing down the creator was easy, but multiple videos preparing the same food often go viral — search the platform for “smash burgers,” for example, and you’ll see several videos with more than a million views.

We also don’t know how much money creators can expect to receive for contributing a menu item to TikTok Kitchen. A percentage of every sale? A one-time fee?

Even if creators don’t make a lot of money directly from TikTok Kitchen, though, being featured on the menu and in promotional materials could have another benefit: more followers, which can lead to bigger paychecks. 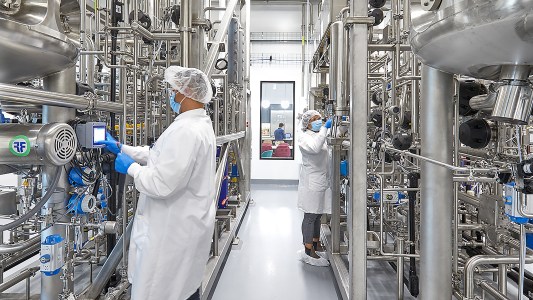 Food
Inside the world’s most advanced cultivated meat facility
By Kristin Houser
Subscribe to Freethink for more great stories
Subscription Center
Sections
Video
Freethink
Subscribe
We focus on solutions: the smartest people, the biggest ideas, and the most ground breaking technology shaping our future.
Subscribe