Concrete is the single most widely used building material in the world. But, dubbed by critics as “the most destructive material on Earth,” it comes with a high cost to the environment.

Now, engineers in Japan have discovered a new method for making concrete that involves recycling old concrete — and combining it with carbon dioxide drawn from the atmosphere.

The problem: The concrete sector emits an incredible amount of CO2. It accounts for 8% of all carbon emissions; if it were a country, it would rank third in emissions, behind China and the United States.

If [concrete] were a country, it would rank third in emissions, behind China and the United States.

Because it is so practical, the material is everywhere — in buildings, dams, roads, and bridges. So, despite the environmental impact, we aren’t going to do away with concrete anytime soon.

The triple-threat: Researchers at the University of Tokyo have discovered how to reduce the concrete’s environmental impact — and they came up with a few solutions at once.

Their new concrete is made out of old concrete rubble, a process that requires less heat and emits less CO2. To make calcium, essential for the chemical reaction that results in concrete, the limestone must be heated to extremely high temperatures, releasing CO2 in the process. Mixing in concrete rubble significantly reduces the heat requirements and, therefore, the amount of CO2 released into the atmosphere.

While some used concrete rubble (left over from demolished buildings or torn up roads, for instance) is sometimes reused as a subbase material, most of it is wasted. Recycling old concrete also means that we have to produce less virgin material.

“We hope that in the coming decades, carbon-neutral calcium carbonate concrete will become the mainstream type of concrete and will be one of the solutions to climate change.”

Another advantage is that the carbon dioxide the new material is combined with can come from either industrial emissions or captured directly from the atmosphere, reports New Atlas.

The caveat: The process may be better for the environment, but the team found that the resulting concrete wasn’t nearly as strong, in a study published in the Journal of Advanced Concrete Technology.

The blocks had an average compressive strength of 8.6 MPa, far lower than the 20 to 40 MPa of Portland cement concrete. So there is room for improvement. For now, the new cement might only be appropriate for small structures that don’t need a high load capacity.

“We hope that in the coming decades, carbon-neutral calcium carbonate concrete will become the mainstream type of concrete and will be one of the solutions to climate change,” said Takafumi Noguchi, an author of the study. 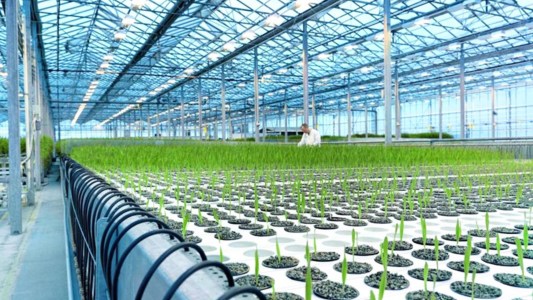