In an effort to study mysterious ocean eddies, an oceanographer teamed up with a bionics company to build an underwater robot inspired by penguins.

The challenge: Ocean currents can sometimes form small temporary loops of water called eddies. These ocean eddies play an important role in the marine ecosystem, moving heat, nutrients, and gases between the surface waters and those deep below.

Or, at least scientists think they do.

Studying ocean eddies has proven difficult because they might be just 30 feet wide and disappear after an average of 12 hours. And even when scientists are in the right place at the right time to study the currents, they haven’t had a good way to collect data on them.

Oceanographer Burkard Baschek’s best option was to tow a rope with sensors attached behind his boat, but it kept getting snagged on rocks, fishing nets, and other obstacles, sending thousands of dollars’ worth of equipment to the ocean floor.

“The only way to avoid such underwater hazards was to develop a device which can do these measurements without being tied to a rope,” Baschek told The Guardian.

The robo-penguin: Fed up with losing equipment to the sea, Baschek teamed up with Berlin-based company EvoLogics to develop an autonomous underwater vehicle (AUV) to collect data on ocean eddies for him.

They named it the Quadroin, a combination of “quadro” for the AUV’s four propellers and “penguin” for the animal that inspired its design.

Diving in: The robot penguin is equipped with sensors to measure temperature, salinity, oxygen levels, and more in ocean eddies — everything Bashek was trying to record with his rope. It has a top speed of 10 knots (about 11.5 MPH) and can swim to a depth of nearly 500 feet.

The Quadroin costs about $95,000, and the hope is to build a “swarm” of them to study ocean eddies. Baschek won’t have to worry about losing his equipment anymore, either, as the robot is designed to float if its electronics fail. 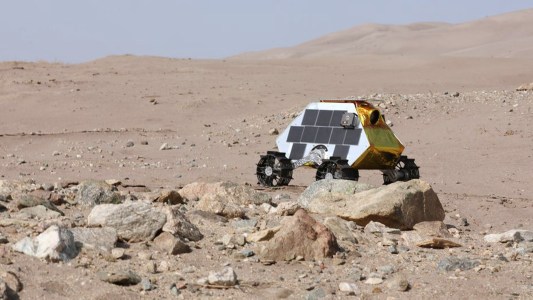