The leader of a marine conservation organization has suggested relocating a handful of sea otters to Northern California to help save its coastal kelp forests, which play a major role in the marine ecosystem.

The forests are rapidly being destroyed by an explosion of sea urchins, but just a few of the fuzzy marine mammals could potentially save the surviving kelp.

Cali’s kelp forests: Kelp is a type of seaweed found in the shallow waters along rocky shorelines. After taking root in the seabed, it grows upward until it reaches the surface and then floats on the water, creating a canopy that shades the sea below.

Dense forests of kelp once thrived along California’s northern coastline, but 95% of those forests have disappeared since 2013, partly due to a spike in ocean temperatures that made it hard for kelp to thrive.

But the biggest reason for the kelp collapse is the spread of a disease that kills starfish — the main predators of purple urchins. When the starfish population declined, the urchin population exploded — and urchins have an insatiable appetite for kelp.

Why it matters: Kelp forests play a key role in the marine ecosystem — they boost ocean oxygen levels through photosynthesis, moderate waves that can erode coastlines, and provide homes to more than 1,000 species.

Ninety-five percent of Northern California’s kelp forests have disappeared since 2013.

Kelp forests can also store large amounts of carbon dioxide — so much so, in fact, that they’ve been nicknamed the “sequoias of the sea.”

“The California coast without kelp is like the Amazon without trees,” marine ecologist Tom Ford told National Geographic in 2020.

You otter know: David Helvarg, founder of marine conservation activist organization Blue Frontier, has an idea for how we can restore kelp forests along California’s northern coast: send in the sea otters.

Sea otters love eating purple urchins about as much as urchins love eating kelp, but they haven’t been seen along California’s northern coast since before they were pushed to the brink of extinction by hunting in the 1900s.

Sea otter numbers are rebounding in Southern California but not farther north, and Helvarg suspects that white sharks might be limiting the animals’ range.

By relocating a handful of sea otters to Northern California, we could get them past a “shark gauntlet” near San Francisco. That would allow their population to start to build up north — and, hopefully,  bring back the disappearing kelp forests.

“Letting otters expand their range on their own is ideal, but relocating them is possible,” he wrote in an op-ed for the LA Times. “It could start with 10 or 12 — a sea otter SWAT team — from what’s estimated to be a California population of about 3,000.”

Zombie urchins: Helvarg himself points out that efforts to relocate marine animals aren’t always successful and that fishers might push back against relocation efforts.

Then there’s the problem of “zombie urchins” to deal with.

“The California coast without kelp is like the Amazon without trees.”

When urchins run out of kelp to eat, they enter a shrunken zombie-like state that allows them to live for 50 or more years on whatever algae they can find growing on rocks.

Sea otters don’t eat zombie urchins, but if kelp forests start to grow again, the pests will rise from the un-dead to eat them. That means we need a plan to get rid of zombie urchins, too, either through trapping, manual destruction, or a bit of luck.

“An urchin disease could potentially have the biggest effect in the future,” UC Santa Cruz researcher Joshua Smith told Inverse in March. “Another possibility is a large winter storm could potentially scour the bottom of the ocean and wipe zombie urchins off the reef.” 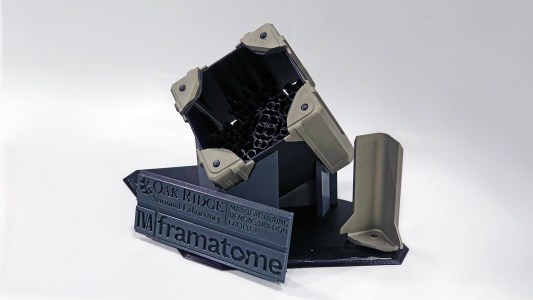 An Alabama power plant is now using 3D-printed nuclear reactor parts, a milestone that could shape the future of nuclear energy.