If blockchains are going to eat the world, like software did, there’s a high bar to be cleared first: blockchain communication.

Even as blockchains bloom — they aren’t just crypto and NFTs anymore! — they tend to be built with their own idiosyncratic systems and mechanisms. This makes it difficult to share information between them; it’s like the Tower of Babel out there.

If blockchains are going to reach their full potential, they need to overcome a challenge: communicating with each other.

The blockchain boom: While their most famous use case is cryptocurrencies, like bitcoin, or the oh-so-hot NFTs, blockchains are finding their way into all sorts of things, like tracking supply chains or smart contracts, for example. These blockchain-powered contracts instantly kick into gear whenever a certain set of conditions are met, automatically completing your contract for you.

As Spectrum points out, all of these various uses make blockchain communication even more crucial. What happens if you use a smart contract to track your order for cold-chain pharmaceuticals, like IBM and Sonoco do, and you need to get that blockchain to talk to the blockchain that your client is paying you with?

While the development of specific blockchains for specific uses means they can be highly specialized, it also means they are siloed. IBC changes that. With IBC, you could use Bitcoin to fulfill an Ethereum smart contract, or vice versa.

“Two pieces of software designed totally independently can now be connected and introduced to each other, without the thousands of coding hours required,” to build blockchain communication programs, Goes wrote.

Talking over each other: Spectrum reported on three different methods of blockchain communication.

Simple enough, but there’s a pretty big catch: All the blockchains involved need to have the same blockchain communication protocol, Belchior told Spectrum.

Gang Wang of Emerson Automation Solutions is working on a different idea: Creating secure “gateways” that can act as a trustworthy link between different blockchains.

Hamburg University of Technology professor Stefan Schulte wants to facilitate blockchain communication by utilizing those smart contracts I keep bringing up. To do so, you need to “burn” your blockchain asset. Let’s say I want to pay you that Bitcoin again. I’d “burn” it by sending it to a user address that doesn’t exist.

Included in the information are the details that would get the Bitcoin to you, kind of like the address on an envelope. A separate, third party looks out for these burned blockchain assets, and they scoop them up and pass them along to their destination for a reward. (To ensure no third-party shenanigans — a key value proposition for blockchains in general — they’ve got some crypto skin in the game, staking currency to the transaction.)

Here’s the rub with this method, though; the transaction fee is over $6, Schulte told Spectrum, so it’s “still far from a solved problem.”

Which pretty much sums up the state of blockchain communication as a whole. 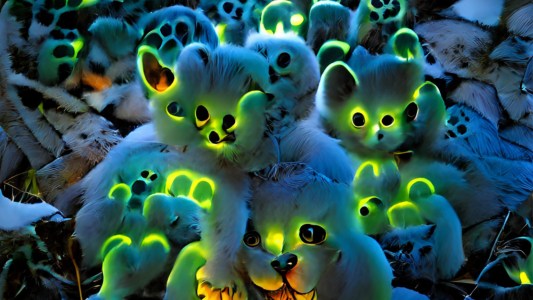 AI artist Botto, which hones its taste via a human community, has made a splash in the art market, going from NFTs to Miami.

AI
AI artist Botto has made its first million
Subscribe to Freethink for more great stories
Subscription Center
Sections
Video
Freethink
Subscribe
We focus on solutions: the smartest people, the biggest ideas, and the most ground breaking technology shaping our future.
Subscribe