Good news for people who dread awkward conversations in Ubers and taxis: Waymo is making its fully driverless car service available to the public.

In 2018, the company (a sister of Google and subsidiary of Alphabet), launched Waymo One, an Uber-like car service in Phoenix using autonomous cars.

Though the cars drove themselves, a safety driver was always behind the wheel, unless the person hailing the ride was part of Waymo’s “early rider” program — those people could ride in cars without safety drivers.

The Waymo One program’s been on hold since March, due to the coronavirus, but Waymo is now relaunching its driverless car service — and this time, all users will ride in cars without safety drivers.

As before the pandemic, Waymo’s fully driverless car service will be limited to a 50-square-mile region in three Phoenix suburbs: Chandler, Tempe, and Mesa. The cost of rides is comparable to those offered by other ride-hailing services, according to Waymo.

Unlike the Uber or Lyft apps, which anyone can download and use, Waymo has always had a limit on the number of people who could use Waymo One. There’s currently a waitlist, and over the next few weeks, Waymo plans to invite more people to join.

“We expect our new fully driverless service to be very popular, and we’re thankful to our riders for their patience as we ramp up availability to serve demand,” CEO John Krafcik wrote in Waymo’s announcement.

Propelled by the Pandemic

While the pandemic put a temporary halt to Waymo’s driverless car service, it might also be the thing that propels it to the next level — the coronavirus is mostly spread person-to-person, and with Waymo’s service, riders won’t have to worry about catching the virus from their driver.

“We have seen concerns about getting into a shared vehicle because of the pandemic — and Uber’s bookings, for example, have dropped significantly,” Chris Jones, an automotive analyst at research firm Canalys, told BBC News.

“People are familiar with Waymo — they have been testing in Phoenix for many years,” he continued. “Trust will be important as people ask, for example: would I put my daughter in a Waymo to take her to school?”

With Waymo’s service, riders won’t have to worry about catching the virus from their driver.

In the months since pushing pause on its driverless car service, Waymo has also equipped its vehicles with a system it calls “cabin air flush” to decrease the chances of one rider catching COVID-19 from the person who was last in the car.

“(It) allows us to cycle through something like four to five times the interior cabin air volume of the Pacifica,” Krafcik told reporters. “That extracts by itself over 99% of whatever it was that prior riders might have brought into the vehicle.”

Coming To a City Near You…Someday

Waymo is also installing partitions between the front and back seats of its vehicles as part of its plan to offer rides with a safety driver in Phoenix again later in 2020.

Those rides won’t be limited to the 50-square-mile region and will help provide the data Waymo needs to expand the service area for its fully driverless cars in Arizona — but when the rides will be available in other states is still unknown.

Waymo has tested its vehicles in dozens of other places, including Los Angeles, San Francisco, and Atlanta, but the path to launching Waymo One in one of those cities is rife with hurdles.

Waymo will need to map its roads, secure approval from regulators, and conduct extensive testing without riders, ensuring that its vehicles can handle the local weather and adhere to local laws.

Still, the expansion of fully driverless car rides in Phoenix is a promising step toward a wider launch of Waymo One — especially if demand meets Krafcik’s expectations. 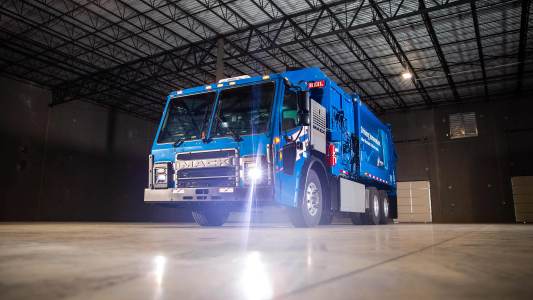 With Mack Truck’s electric garbage trucks set to be delivered in 2021, your mornings may be getting quieter soon.