We’ve seen exoskeletons that help people recover from strokes, get more from their workouts, and even achieve superhuman strength.

Now, there’s a new exoskeleton on the scene — and this one lets wearers channel their inner robot warriors.

Suit up: Japanese company Skeletonics has been making robot exoskeletons for more than a decade, and unlike the sleek suits designed for use at home or work, these devices are larger-than-life spectacles.

Each is at least eight feet tall, and once a person is strapped in, whatever movement they make with their puny human limbs is mirrored in real-time by the robot’s massive arms and legs — they can even pick up light objects using the robot’s hands.

“Skeletonics technology connects the mechanical and electrical components of the suit with the wearer’s body to offer a smooth, harmonious experience of movement,” according to the company’s website.

Boxing exoskeletons: Skeletonics’ Arrive model, which has been available for purchase or rent in the US since 2020, has been on stage with Muse and styled by Balenciaga.

Now, the company has unveiled a new version of its exoskeleton designed specifically for the boxing ring.

It’s called the Skeletonics Fighter, and while specs have yet to be released, Skeletonics has shared videos of wearers shadowboxing in the suits (whether they’re built to withstand actual contact is still unknown).

The big picture: While Skeletonics’ exoskeletons might be more form than function, most companies in the wearable robotics industry are developing devices to improve our lives at home and at work.

These exoskeletons might be cutting-edge and expensive today, but as the market grows, prices should drop thanks to innovation and mass production.

“There is no doubt in my mind that these devices will eventually be sold at hardware stores,” Homayoon Kazerooni, founder of exoskeleton maker SuitX, told BBC News. “As the prices come down you’ll be able to simply buy them at Home Depot.” 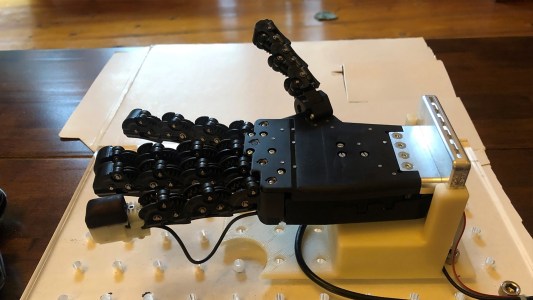 A new artificial fingertip replicates humans’ sense of touch by mimicking the microscopic anatomy of our fingertips.