A new shape-shifting material out of Virginia Tech can be used to give robots the power to transform smoothly between different shapes — like going from a drivable robot to a flying drone.

The few exceptions typically use complex systems of motors, gears, and hinges to reconfigure themselves into different shapes suited for different tasks, but every extra part is a new potential point of failure.

We want to be able to build more versatility into robots, though, because it would allow us to use fewer of them to do more, and that cuts down on costs.

The morphing and fixing process can take as little as one-tenth of a second.

The idea: Virginia Tech researchers set out to design a shape-shifting material that could morph from one configuration to another, hold it, and then morph back again — repeatedly and without the use of any motors.

“One of the challenges was to create a material that was soft enough to dramatically change shape, yet rigid enough to create adaptable machines that can perform different functions,” researcher leader Michael Bartlett said.

Once they had their material, they then demonstrated how it could serve as the basis for transforming robots, including one that can quickly transition from driving to flying.

How it works: To create the shape-shifting material, tubes of metal were embedded between several flat layers of rubber. Heaters were embedded alongside the metal, and a geometric pattern, inspired by the Japanese art of kirigami, was cut into the rubber.

When the heaters are switched on, the metal melts and the once-flat material can take on new shapes. When they’re switched off, the metal cools and solidifies, holding the material in the new shape. This morphing and fixing process can take as little as one-tenth of a second.

The big picture: It’s not clear how much the material costs to make, or how easy it would be to scale up.

Even if it couldn’t be cheaply mass-produced, though, it’s easy to think of high-value uses for the shape-shifting material, such as a space rover that could quickly reconfigure itself into a helicopter any time it encountered rough terrain.

“These composites are strong enough to withstand the forces from motors or propulsion systems, yet can readily shape morph, which allows machines to adapt to their environment.” 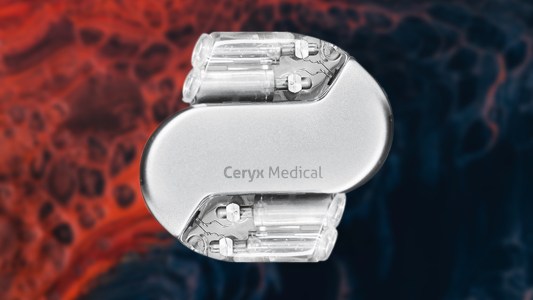