By deliberately infecting people with the flu and cold viruses, researchers have strengthened the evidence that wearable health monitors could help stem the spread of infectious diseases.

Catching viruses early: It takes about two days after a person is exposed to the flu virus for symptoms to develop. For the viruses that cause the common cold, the incubation period can be one to three days.

During this period that a person is infected but feels fine, they might go to work, school, or other places where they spread the virus to others, so it’d be useful to be able to detect infections before the onset of symptoms — and wearable health monitors might make that possible.

Health monitors could warn people that they’re sick before they start to feel ill.

The idea: By looking at the biometric data collected by Fitbits, smart watches, and other wearables, we might be able to see changes that indicate a person is infected before they start to feel sick.

This early warning could not only let people know they should avoid situations where they might spread an infection to others, but also give them the opportunity to be treated sooner, when interventions are most effective.

The challenge: Figuring out whether health monitors could work as early infection detectors has proven difficult, though, as past studies have all relied on people catching viruses “in the wild.”

That meant researchers never knew when a person was actually exposed to a bug — and without a starting point to work from, it was impossible to know how long it took a wearable to pick up on an infection.

This approach also put a severe limit on sample sizes in the studies — one group enrolled more than 30,000 people in a study to see whether health monitors could detect COVID-19, but only 54 people ended up testing positive for the disease during the course of the study.

What’s new: For a new study, a Duke University-led team decided to take a different approach — instead of waiting for people to catch the flu or cold viruses organically, they directly exposed every study participant to one of the viruses through a human challenge trial.

“The beauty of the challenge study is that we know the time of exposure to the pathogen, which is not true in these real-world studies,” senior author Jessilyn Dunn told STAT. “That makes this study uniquely powerful.”

The trial: For their trial, the researchers had about 50 people wear E4 wristbands made by MIT spin-off Empatica.

The health monitors collected data on the trial participants’ heart rates, skin temperatures, movements, and more, both before and after exposure to either the flu virus (H1N1 influenza) or a common cold virus (human rhinovirus).

The participants reported their symptoms twice daily after exposure, and the researchers took daily measurements of their viral shedding (the amount of virus they were releasing into the environment).

The algorithm could predict an infection’s severity 24 hours before symptoms appeared.

The findings: A computer algorithm developed by the researchers then used this information to predict with 92% accuracy whether or not a person had the flu. For rhinovirus, its accuracy was 88%.

Twenty-four hours before symptoms appeared, the algorithm could predict whether a person’s infection would be mild or moderate, with 90% accuracy for the flu and 89% accuracy for a cold.

The cold water: The study was small, with fewer than 50 participants. It was also limited to just two viruses and just one type of wearable.

However, it does support the theory that data from wearable health monitors can be used to predict both infections and infection severity prior to symptoms appearing, suggesting that the devices might one day help us prevent the spread of infectious diseases like flu or COVID-19.

“I don’t think that this is going to be a standalone tool,” Dunn said, “but when we’re talking about resource allocation and triage, this can provide some very useful insight for how to go about prioritizing who should be tested and who should get what care when.” 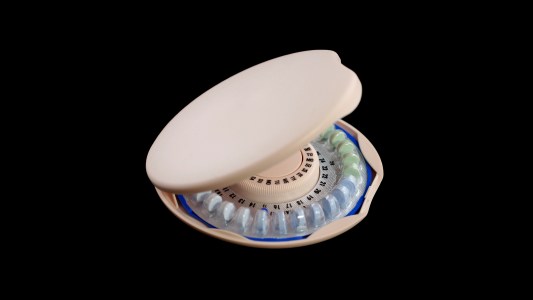