Another august institution is throwing its weight behind the psychedelic research renaissance: NYU is launching a Center for Psychedelic Medicine.

Established with $10 million in funding, the Center for Psychedelic Medicine — under the direction of Michael Bogenschutz, professor of psychiatry at NYU Grossman School of Medicine — will “support health-focused research across the translational spectrum,” as the university release puts it, from basic science to phase 3 clinical trials.

NYU joins a quickly crowding field, as centers dedicated to psychedelic medicine and research have recently opened their doors — and opened minds — at Johns Hopkins and Mount Sinai.

But NYU Langone, in New York City, is no stranger to the field; previous studies out of NYU have examined using psychedelics to treat distress in patients with cancer, addiction, and PTSD, as well as research on more exotic drugs, like ibogaine.

“To the outside world, I was doing really well, but inside me I was struggling,” Rahn told the New Yorker’s Nathan Heller. He turned to a bottle of wine to sleep, cocaine to party, benzodiazepines for his anxiety.

“A friend recommended I have a psychedelic experience, to piece together a solution,” he told Heller. He tried psilocybin and LSD, which helped him to process his traumatic memories of discovering the body of his mother, who died during a vacation in the Dominican Republic when Rahn was eight.

MindMed’s contribution is earmarked for funding the Center’s Psychedelic Medicine Research Training Program, which NYU believes is a differentiator from the other research centers forming psychedelics’ academic ecosystem.

“This is a new era in psychopharmacology,” Yale professor of psychiatry and neuroscience John Krystal — whose lab pioneered the medicinal use of ketamine as a treatment for depression — told me via email.

“With the approval of esketamine by the FDA for the treatment of patients with treatment-resistant forms of depression and depression in the context of high suicide risk, we have the need for a new type of expert psychopharmacologist.”

“These initiatives will provide an environment in which scientists, clinicians, trainees, and other staff contribute in meaningful ways to ensure that the momentum created by the modern psychedelic renaissance is sustained and continues to yield medical breakthroughs backed by sound science,” Bogenschutz said in the release. 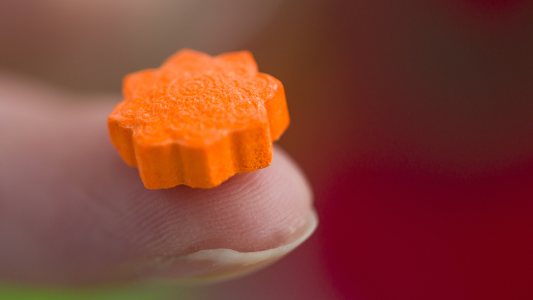 A small, first-of-its-kind study has piloted the use of MDMA for alcohol addiction therapy.