An autonomous surgery robot is now one step closer to hospital operating rooms, having performed a tricky medical procedure on live pigs — and done it even better than a human surgeon could.

The challenge: If part of a patient’s bowel is diseased or damaged, doctors have to remove that section and then suture the two healthy ends together to make the digestive tract whole again.

That reconnection procedure is called an “intestinal anastomosis,” and it’s incredibly tricky — the tissue is very soft, meaning surgeons must work with a delicate hand. Imprecisely placed sutures can result in life-threatening leaks.

At the time, they demonstrated that STAR could perform an intestinal anastomosis on live pigs, with the help of doctors, during an open surgery — that means a large incision in the animal’s abdomen, with the targeted part of the intestine was pulled out of their bodies.

What’s new: That’s impressive, but open surgeries are risky, because they cause more collateral damage and increase the risk of infection.

Now, STAR has been upgraded to perform the procedure on pigs through a tiny cut, rather than a large incision.

This approach — called “laparoscopic” or “keyhole” surgery — is less invasive for patients, and often results in quicker recovery times and fewer complications. But it can also be more difficult for surgeons.

“Once you open the body, everything kind of moves inside the patient so you can’t plan ahead of time,” researcher Justin D. Opfermann told New Scientist. “If you’re doing soft tissues like intestines, as soon as you touch it, it moves out of the way.”

Not only is STAR now the first surgery robot to autonomously perform keyhole surgery, according to JHU, it also performed it better than a human surgeon (based on criteria such as suture spacing, completion time, and leak pressure).

“Our findings show that we can automate one of the most intricate and delicate tasks in surgery: the reconnection of two ends of an intestine,” senior author Axel Krieger said.

Looking ahead: STAR correctly placed about two-thirds of the 86 stitches made in the pigs on its first attempt — it had to be manually guided into place to redo the others — so the robot isn’t going to be performing any surgeries without doctors’ supervision just yet.

However, it’s already more autonomous than it was in 2016, and its ability to perform a surgery laparoscopically is a big advance, especially given that keyhole surgeries are becoming more common.

A fully autonomous STAR is likely “decades” away, according to Opfermann, but JHU plans to continue developing the surgery robot in the hope of having it ready to help surgeons in human trials in about five years. 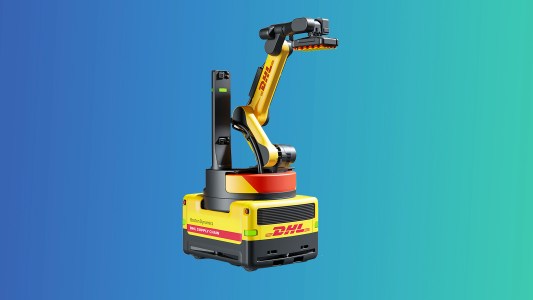 DHL Supply Chain is paying Boston Dynamics $15 million for a fleet of its autonomous warehouse robots, which can each move 800 boxes/hour.