AI could help doctors identify which skin cancer patients are at high-risk of a melanoma recurrence before their initial cancer is even treated — giving them a head start to recommend more aggressive treatments that can prevent a recurrence.

The disease: Every year in the US, nearly 100,000 people are diagnosed with melanoma and about 7,600 die from it, making melanoma the deadliest type of skin cancer.

Most people who die from melanoma were diagnosed and treated when the disease was still in its early stages, but then they experienced a melanoma recurrence that wasn’t detected until the cancer had already spread.

Melanoma is the deadliest type of skin cancer.

To treat or not to treat: When melanoma is detected early, doctors will usually just remove the cancer with surgery. If it’s more advanced, though, they’ll also treat the patient with immune checkpoint inhibitors, which boost their immune system but can cause serious side effects.

Since most melanomas can be treated successfully without them, doctors may aim to spare patients the side effects of the more aggressive drugs until it’s clear they’re needed.

However, if a doctor knew in advance that a patient with early-stage melanoma was at high-risk of recurrence, the risk of side effects could be worth it — but currently there’s no way for them to accurately make that prediction.

What’s new? To find out if AI could help meet this need, a Massachusetts General Hospital-led team used electronic health records and 1,720 early-stage melanomas to train and validate five algorithms to predict the likelihood of melanoma recurrence within five years.

They discovered that a “gradient boosting” algorithm was best suited for the task, correctly classifying about three out of four patients. They also identified tumor thickness and rate of cancer cell division as the two biggest predictors of recurrence.

“Our results suggest that machine learning algorithms can extract predictive signals from clinicopathologic features for early-stage melanoma recurrence prediction, which will enable the identification of patients who may benefit from adjuvant immunotherapy,” said senior author Yevgeniy R. Semenov.

The AI correctly classified three out of four patients, but future efforts could make it even more accurate.

The bottom line: The model had a sensitivity of 76% and 68.7% and a specificity of 78.4% and 79.4% on internal and external validations, respectively. That means it missed about 24-31% of people who experienced a melanoma recurrence and falsely flagged about 21% of people who did not experience one.

That could amount to a significant number of people not being offered immune checkpoint inhibitors when they could benefit from them or going through the aggressive treatment when they don’t really need to be.

However, future efforts could further hone the algorithm to improve its ability to identify people at high risk of melanoma recurrence so that doctors can work to stop the cancer before it has a chance to come back.

Neuroscience
Brain implant translates neural activity into letters, letting a paralyzed man “speak”
A new device allowed a paralyzed patient to “speak,” spelling out full sentences in real-time with an error rate of about 8%.
Up Next 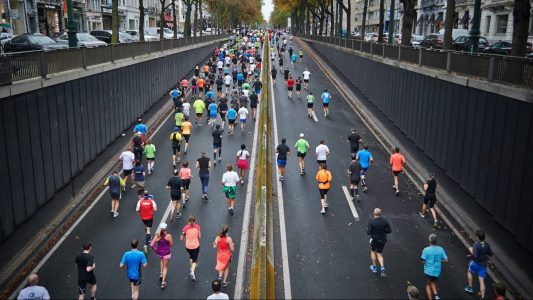 MIT and Harvard researchers mapped out many of the cells, genes, and cellular pathways that are modified by exercise or high-fat diet.