Food scientists have discovered that special nanoparticles found in plants can prevent the formation of texture-ruining ice crystals in ice cream.

Not only could this lead to tastier, longer-lasting ice cream, it could also be used in medicine, keeping donor organs viable longer during transport.

The bane of ice cream: The ice crystals in ice cream are initially too small to negatively affect its texture. But if the ice cream’s temperature fluctuates — driving it home from the grocery store, for example — these crystals can melt.

The water from several smaller crystals can then merge and form larger ice crystals when the container reaches your freezer. If these crystals are larger than about the width of a hair, the ice cream can take on a grainy texture.

The more you leave ice cream out on the counter, partly melting and then refreezing it, the worse it gets.

To prevent these larger ice crystals in ice cream, manufacturers add stabilizing ingredients, such as guar gum. But according to Tao Wu, a food scientist at the University of Tennessee, these stabilizers aren’t always effective.

“Their performance is influenced by many factors, including storage temperature and time, and the composition and concentration of other ingredients,” he said. “This means they sometimes work in one product but not in another.”

The idea: To survive in sub-zero temperatures, some plants and animals produce special proteins that are “amphiphilic,” which means they have surfaces that repel water and surfaces that attract water.

These are called “antifreeze proteins,” and they bind to small ice crystals in plants or animals to stop them from merging into larger crystals, which would damage the creatures’ tissues.

It’s possible that these natural antifreeze proteins would prevent the formation of larger ice crystals in ice cream, too, but they’re too expensive and rare to be a viable solution to the problem.

Wu knew that the cell walls of plants contain particles called cellulose nanocrystals (CNCs) that are also amphiphilic, but unlike antifreeze proteins, they’re cheap and abundant. That inspired his team to see if CNCs could help ice cream maintain its creamy texture.

The study: At first, adding CNCs to an ice cream model didn’t make any difference in the size of its ice crystals. After the ice cream was stored for a few hours, though, the crystals in the CNC-laced ice cream stayed the same size while those in the untreated ice cream grew.

When ice cream was subjected to temperature fluctuations, CNCs prevented the formation of large ice crystals better than standard stabilizers. CNCs slowed the melting of the ice crystals, too, which suggests they could potentially be used to create slow-melting ice cream.

Beyond the freezer: According to Wu, the quantities of CNCs needed to slow the formation of large ice crystals in ice cream have been shown to be nontoxic in other labs, but the FDA would still need to review and approve their use in any food.

Beyond the world of frozen treats, Wu notes that the discovery could have another use that’s even more important than creamy ice cream: preserving donor organs during transport.

“At present, a heart must be transplanted within a few hours after being removed from a donor,” he said. “But this time limit could be eliminated if we could inhibit the growth of ice crystals when the heart is kept at low temperatures.” 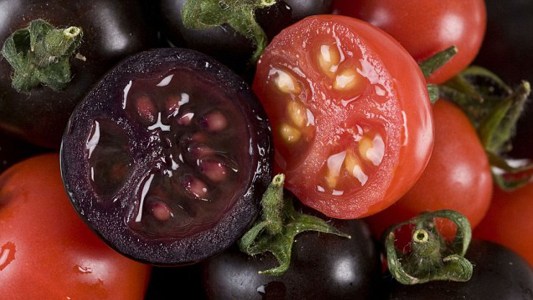 Purple tomatoes modified to be packed with antioxidants found in blueberries could soon be approved for sale by the FDA.