There’ll be no genealogical records created from this voyage of the Mayflower — the next vessel to cross the Atlantic bearing that name will be a robot boat.

Crew-free, the new Mayflower will set sail across the Atlantic in 2021. It’s debut marks a high-profile entrant into a fast-burgeoning field, as tech’s dreams of autonomous transport find a slightly easier go of it plying the seas.

The U.S. Navy was unsurprisingly early to the party, sending out baby robot boat flotillas as early as 2014. Various other efforts are also underway, like the MIT and Amsterdam Institute for Advanced Metropolitan Solutions collaboration “Roboat” — they’re creating autonomous platform boats that can make ad hoc bridges, collect waste, and carry goods and people.

There are two main factors beneath the rising tide of interest, Mims writes: the money to be made, and the comparative ease of developing a robot boat as opposed to a self-driving car or aerial drone.

The vast majority of the world’s trade is conducted at sea, as vessels move trillions of dollars worth of cargo and generate billions for shipping companies. It’s a very big pie to get a piece of. (And it’s a pie so large that we currently don’t have enough humans to bake it, robot boat proponents argue — so they’re not leading a robotic mutiny against the merchant marines.)

Robot boats could conduct other valuable services too, from river and canal transportation to identifying navigational hazards and various military applications. They’re ideal for time consuming and/or repetitive tasks, like seafloor scanning and infrastructure check-ups, and they can toil tirelessly.

According to technology partner IBM, the autonomous Mayflower will be doing just that, using solar power to spend long periods at sea, utilizing sensors to gather scientific data. The hope is to provide insights into climate change, ocean exploitation, pollution, and how all of those things impact marine animals.

Compared to person-choked roads or even urban airspace, a robot boat would navigate a relatively obstacle-free environment — except for the cruel capriciousness of the ocean itself, of course.

Out upon the open sea, a robot boat could fall victim to everything from a mighty storm to a rogue wave — freak monsters capable of towering over eight stories into the sky, crushing walls of saw-toothed fury.

But there’s no jaywalkers, strollers, shopping carts, and quickly darting cars; it is, by autonomous vehicle standards, a fairly friendly place to drive.

The Mayflower is equipped with programming informed by salty mariners, Mims reports; its hull is constructed by experienced shipbuilders. Still, its trans-Atlantic trip will be the first by a civilian robot boat, and with areas of the Atlantic where the internet still can’t reach, the Mayflower could very well vanish.

No journey across the sea, even with an AI at the helm, is without risk. 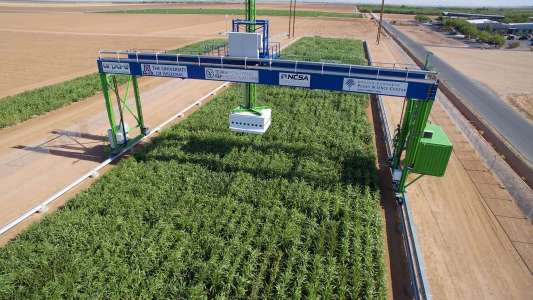 Agriculture
This massive farm robot is helping secure the future of food
By Kristin Houser
Subscribe to Freethink for more great stories
Subscription Center
Sections
Video
Freethink
Subscribe
We focus on solutions: the smartest people, the biggest ideas, and the most ground breaking technology shaping our future.
Subscribe