Jacquie Berglund considers herself more of a wine drinker than a beer drinker, yet she is building an empire around the beer brand, Finnegans.

When Berglund purchased the brand for only a dollar, she knew that if Finnegans were to make an impact, the beer needed to be in every pub in Minnesota. Now you can find Finnegans in four Midwest states. But Finnegans is more than a beer company. From combating food insecurity to nurturing young social entrepreneurs, Berglund hopes Finnegans will leave the world a better place. It is a hybrid for-profit/nonprofit company whose motto is, “We turn beer into food.”

Berglund can trace her initial spark back to when she heard Billy Shore speak in 1998. Shore is a humanitarian who founded Share Our Strength and the No Kid Hungry campaign, two organizations focused on alleviating poverty and hunger.

“It was like my hair was on fire,” Berglund says, adding that listening to Shore’s speech was the moment she knew she wanted to use her business acumen to launch a company with a social mission. Berglund took a cue from the Paul Newman Foundation and their 100% profit donation model. Now, she donates the profits from Finnegans beer to Finnegans Community Fund and uses it to provide food to people who need it most.

Berglund is no stranger to food insecurity. “I understand the condition of the working poor,” she says.

Berglund’s family epitomizes the American Dream. Her mother was a waitress, and her father was a janitor. As a young child, she knew her family didn’t have much money. But, by the time Berglund was in college, her family had moved up a few economic classes. Her dad worked full-time to put himself through school and become the director at a hospital. Berglund says that her family background has given her a sense of compassion for issues that surround poverty. Despite her childhood, she considers herself lucky.

“If I were born into that situation now, I would have had a very different life,” she says.

When Berglund first launched her business, she focused on broadly addressing poverty. But, when her savvy business mind kicked in, she realized she would accomplish more with a specific goal. So she honed in on hunger.

“I’m a basic needs gal,” she says, “We live in the wealthiest country in the world. It’s a crime that people can’t meet their basic needs.”

Food insecurity isn’t uncommon in America. Allison Karpyn, associate professor in Human Development and Family Sciences at the University of Delaware, says that one in six people in America don’t have enough food for a healthy lifestyle and it affects children most. She says that current benefits programs, like SNAP or WIC, aren’t enough. As food prices increase with inflation, benefits aren’t keeping up and are inadequate for supporting a family. Karpyn says we need a “revamp of our social safety system,” increased benefits, and changes to policies that make it hard for people to apply. But, until that happens, places like Finnegans can find alternative ways to fill in the gaps. “They are the innovators. They have the flexibility to try something new and create new ways to get healthy products into the food system,” Karpyn says.

Food insecurity doesn’t only mean going to bed without food. It can mean malnutrition for people who have limited resources and access to healthy options. The corner store might stock cheap snacks like chips and soda, but the shelves are empty of fruits and veggies, which are harder to transport and don’t have a long shelf life.

So, to turn beer into food, Finnegans uses the profits from the beer company to buy organic produce from local farmers. They distribute the produce to food banks in the area. They also have a ‘reverse food truck‘ that is used to collect food and monetary donations in exchange for beer samples. The truck has been to beer festivals, corporate events, and even weddings where the bride and groom want to ‘pay it forward.’ Berglund says ‘it takes a village’ to make a significant impact. So, she has had up to eighty volunteers pouring beer for festival goers, who can have a drink and donate to the cause in one place.

Berglund was surprised by the rapid success of the reverse food truck. When she began receiving calls from people wanting to learn more, she decided to give away the resources (graphics and plans) for others to create their own reverse food truck. Now there are at least six traveling the country, supporting local food banks.

Finnegans is now in its 20th year of business and approaching two million dollars of impact, which equates to about two million pounds of organic food distributed to families in need. But Berglund, who refers to Finnegans as “the small little beer engine that could,” isn’t showing any signs of slowing down.

In 2018 she opened the Finnovation Lab, an incubator for social entrepreneurs. They provide Finn Fellows with $50,000 and mentorship to develop their social business idea. This year they are hosting the second class of fellows whose projects range from supporting education for refugees or designing inclusive and diverse video games, to providing support for positive co-parenting after a breakup. Berglund’s Finn Fellows are an extension of the mission ingrained in her life.

“I always wanted to leave the world a better place,” she says, “I’m just hardwired that way.” 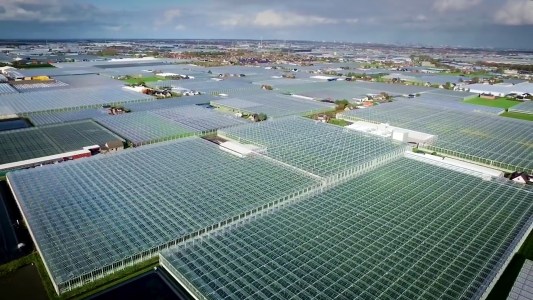 In a new Freethink original series, Michael O’Shea goes around the world to introduce us to the scientists who are working hard to ensure that we can feed our future world.

Sustainability
These pioneers are building the sustainable food systems of tomorrow
Subscribe to Freethink for more great stories
Subscription Center
Challenges
Video
Freethink
Subscribe
We focus on solutions: the smartest people, the biggest ideas, and the most ground breaking technology shaping our future.
Subscribe