An autonomous shuttle developed by Ford is delivering fresh produce and milk to food insecure seniors in Detroit — and besides combating hunger, the vehicle could help shape the future of self-driving tech.

Why it matters: There are roughly 5.2 million food insecure seniors in the U.S., according to Feeding America — that’s more than double the number of seniors who didn’t have consistent access to enough healthy food in 2001.

Undernourishment can do more than cause people to feel hungry. For seniors, it also leaves them at greater risk of many health issues, including depression, heart failure, and diabetes.

“Some have health issues that keep them confined to their home … and some can no longer drive.”

The challenge: About 50% of food insecure seniors live below the poverty line, but even those that can afford food may have difficulty accessing or cooking it.

“Some have certain health issues that keep them confined to their home, some are unable to stand and cook for themselves, and some can no longer drive,” dietitian and nutritionist Laurel Sterling told CNY Health.

Free food delivery programs can help ensure seniors don’t go hungry, but driver shortages are already an issue across the country, and the difficulty could get worse in the future as the U.S. population grows older.

These deliveries happen once a month, and typically include shelf-stable foods along with some produce and dairy. Now, Ford is adding a second monthly drop-off consisting of more fresh produce and milk — and this one will be delivered via autonomous shuttle.

The shuttle will be loaded with bags of food at Gleaners and then travel a fixed route to Rio Vista for unloading and distribution. A safety driver will be behind the wheel, and a remote team capable of taking control of the vehicle will also monitor it at all times.

“Many, many, many times we’re the only person some of these people see in a day.”

The trade-off: While autonomous shuttles could help address driver shortages, having actual humans deliver meals to food insecure seniors can ensure they have some social interaction.

“Many, many, many times we’re the only person some of these people see in a day,” a Meals on Wheels driver from New Jersey told Brown University researchers.

This wouldn’t be an issue for the food insecure seniors at Rio Vista — they still have other residents and whoever is distributing the food —  but programs that deliver to seniors that live independently will need to take it into account if autonomous vehicles become widely available.

The big picture: Ford’s hope is that the six-month-long pilot program will yield insights that help it develop future autonomous delivery vehicles for use in underserved areas and beyond.

“​​As a result [of the program], the team will learn even more about moving goods autonomously, while directly addressing a need in the community,” John Davis, Ford’s director of autonomous vehicle and future technology, wrote. 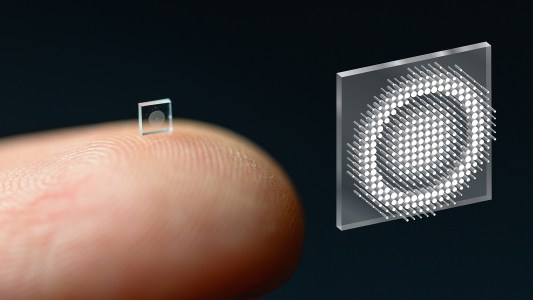 Researchers have created a salt-grain sized micro camera capable of taking images almost on par with a regular camera.