NASA got a big surprise when it landed a spacecraft on the asteroid Bennu in 2020 and blasted a huge crater in the rocky body — but the learning experience could help save the Earth if an asteroid ever threatens to wipe us out.

The mission: In 2016, NASA launched the OSIRIS-REx spacecraft to get an up-close look at the asteroid Bennu. Two years and 1.2 billion miles later, the spacecraft arrived at its destination and began surveying Bennu from as close as 4 miles above its surface.

In 2020, NASA took the mission a step further, sending OSIRIS-REx to the asteroid’s surface to collect a sample — something no NASA spacecraft had ever done before.

For that part of the mission, OSIRIS-REx briefly touched down on the asteroid’s surface and sent out a puff of gas. It then captured a bit of the material dislodged by the gas before firing its thrusters to back away from Bennu.

The plan worked, but in NASA’s simulations of the asteroid, the process should have left the tiniest divot on the asteroid’s surface. The actual mission created an explosion of debris and a 26-foot-wide crater at the landing site.

“We expected the surface to be pretty rigid,” Dante Lauretta, principal investigator of OSIRIS-REx, told Space.com. “We saw a giant wall of debris flying away from the sample site. For spacecraft operators, it was really frightening.”

Learning experience: Based on data from the collection mission and a follow-up flyby observation of the landing site, researchers have determined that the surface of the asteroid Bennu is so loosely packed, OSIRIS-REx would have just kept sinking into it if it had not fired its thrusters on schedule.

NASA describes it as being akin to the plastic ball pits children play in — put any stress on the rocks and bits of dust on Bennu’s surface, and they’ll easily slide past one another.

“Our expectations about the asteroid’s surface were completely wrong,” said Lauretta.

“It turns out that the particles making up Bennu’s exterior are so loosely packed and lightly bound to each other that they act more like a fluid than a solid,” he added.

The researchers have now used the data from the OSIRIS-REx mission to recalculate Bennu’s properties, detailing what they learned in two papers.

This experience could help scientists accurately interpret remote data on other asteroids — and that could be hugely important if we ever find ourselves facing down an asteroid impact and need to launch a mission to deflect or destroy the threatening space rock. 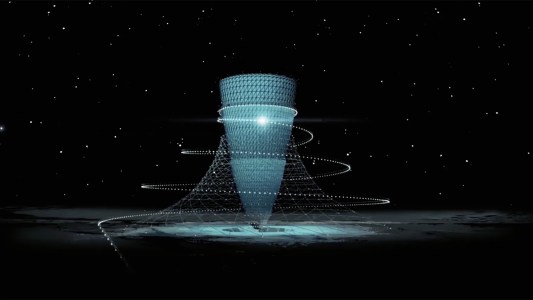 To create artificial gravity for off-world explorers, Japan plans to build spinning, cone-shaped facilities on the moon and Mars.

Aerospace
The sci-fi plan to create artificial gravity on the moon, Mars
Subscribe to Freethink for more great stories
Subscription Center
Challenges
Video
Freethink
Subscribe
We focus on solutions: the smartest people, the biggest ideas, and the most ground breaking technology shaping our future.
Subscribe