For the first time ever, researchers have grown plants in lunar soil — a huge achievement that puts humanity one step closer to living and working off-world.

Why it matters: NASA plans to send astronauts to the moon again in 2025, and by 2028, it hopes to have a sustained lunar presence.

If we can grow food for astronauts on the moon, we won’t have to ship as much of it from Earth. And learning how to grow food in lunar soil could potentially help us do the same on Mars when it’s time to send astronauts there.

The challenge: Lunar soil is very different from terrestrial soil — it doesn’t contain any organic matter, for one thing, and it is filled with sharp meteorite fragments and exposed to tons of cosmic radiation.

While NASA astronauts did bring samples of lunar soil back to Earth during the Apollo missions,  no one had ever attempted to grow anything in it before now — meaning we never knew whether those differences would be too much for plants to overcome.

First harvest: Fifteen years ago, University of Florida researchers Rob Ferl and Anna-Lisa Paul submitted their first of several requests to NASA for lunar soil samples. They hoped to receive 4 grams from one Apollo mission, but 18 months ago, NASA sent them 12 grams total from three missions.

“That made a big difference in enabling us to take a deeper look into the science and the effects of lunar regolith on plants than we would have otherwise been able to do,” Paul told CNN.

That may have been far more soil than they were expecting, but it still only amounted to a few teaspoons of dirt, so the scientists had to be precious with it, placing about a gram’s worth in each thimble-sized well they were using as a “pot.”

They then added a liquid nutrient solution and a few ​​thale cress seeds to each well — this plant was chosen because it’s well studied and its genetic code has been fully mapped, meaning the researchers would be able to study the effect of the lunar soil on the plant’s gene expression.

After planting seeds in simulated lunar and Martian soils, as well as terrestrial soils, to serve as controls for their experiment, the scientists waited to see what would happen — and they didn’t have to wait long.

“After two days, we were amazed that every single seed germinated. It was extraordinary and a little breathtaking,” Paul told WIRED. “We were watching the very first seeds ever in the history of humanity — in the history of the solar system — growing in lunar material.”

The turn: Day six was when the researchers began to notice that the lunar soil plants weren’t as robust as the controls — their growth started to slow down, some of their roots and leaves became stunted, and a few developed a reddish pigmentation.

On day 20, the researchers harvested the plants to study their genetic expression.

“At the genetic level, the plants were pulling out the tools typically used to cope with stressors, such as salt and metals or oxidative stress, so we can infer that the plants perceive the lunar soil environment as stressful,” Paul said.

Looking ahead: Now that we know it is possible for plants to grow in lunar soil, the next step will be figuring out how to help them thrive in it.

“Ultimately, we would like to use the gene expression data to help address how we can ameliorate the stress responses to the level where plants — particularly crops — are able to grow in lunar soil with very little impact to their health,” Paul said. 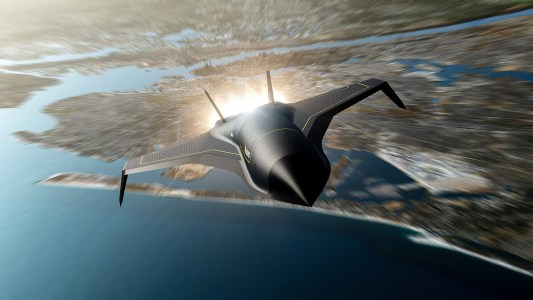 Atlanta-based startup Hermeus is developing a hypersonic plane to ferry passengers around the globe at incredible speeds.

Aerospace
A 20-seat hypersonic plane is being built in Atlanta
By Kristin Houser
Subscribe to Freethink for more great stories
Subscription Center
Sections
Video
Freethink
Subscribe
We focus on solutions: the smartest people, the biggest ideas, and the most ground breaking technology shaping our future.
Subscribe