At the request of the astronomy community, NASA is developing a space telescope devoted to hunting down habitable planets around other stars — and it could allow us to finally answer the ultimate question: Are we alone in the universe?

Once every decade, the National Academies of Sciences, Engineering, and Medicine surveys the astronomy and astrophysics community, identifying its priorities for the next 10 years and soliciting its recommendations for project funding.

The latest report based on that survey, dubbed Astro2020, was released in November 2021. It lists three priority science areas, and one of them is to discover Earth-like exoplanets, with the goal of determining whether we are alone in the universe.

“The task for the next decades will be finding the easiest of such planets to characterize, and then studying them in detail, searching for signatures of life,” according to the report.

The goal is to launch the new space telescope in the first half of the 2040s.

To make that happen, the astronomy community recommended that NASA develop a new space telescope optimized for studying exoplanets.

This new telescope should be sensitive to ultraviolet, optical, and near-infrared wavelengths, and it should be able to observe planets 10 billion times fainter than their host stars. It should also be able to hunt for signs of life in the atmospheres of dozens of potentially habitable exoplanets.

According to the report, such a telescope would cost an estimated $11 billion to build, implement, and then operate for five years; the goal would be to launch it in the first half of the 2040s.

During a recent presentation at the 241st Meeting of the American Astronomical Society, Mark Clampin, the director of NASA’s astrophysics division, announced that NASA is currently designing a new space telescope based on the recommendations in the Astro2020 report.

This telescope is likely to be a bit of a cross between two proposed telescopes that NASA submitted for consideration prior to the Astro2020 survey: the Habitable Exoplanet Observatory (HabEx) and Large UV/Optical/IR Surveyor (LUVOIR).

While little about the project is set in stone — mainly because NASA doesn’t have an approved budget for it yet — Clampin was able to share what NASA has come up with so far, as well as announce a working name for the telescope: the Habitable Worlds Observatory (HWO).

As it stands, the plan is to position the HWO at Earth’s second Lagrange Point (L2), an area of space about 1 million miles away from Earth in the direction opposite the sun. There, the gravity of the sun and Earth will keep the telescope in place.

L2 is an excellent location for space telescopes because their view in the direction opposite of Earth is never obstructed by the sun — the James Webb Space Telescope (the Webb) calls L2 home, as does ESA’s Gaia observatory. (It sounds like it’s getting crowded, but there’s plenty of room in the neighborhood.)

As for the design, one of the most important parts of a space telescope is the mirror it uses to collect and focus light. In some cases, like Hubble, this mirror is sent to space in one piece, and in others, like Webb, it’s divided into segments that are then very precisely aligned until it works as one flawless piece.

The former is simpler and can deliver crisper images, but the latter can be easier to transport, since the mirror can be folded up during launch.

The original HabEx proposal included a single 4-meter-wide mirror, while the idea for LUVOIR was to divide the mirror into segments that could be configured to work as a 15-meter-wide mirror.

HWO is expected to have a 6.5-meter segmented mirror — about the same size as Webb’s — but while NASA can align Webb’s mirror to “only” within a few nanometers, it wants to be able to align HWO’s on the picometer level. That’s one-millionth of one-millionth of one meter.

One of the most exciting details Clampin shared is NASA’s commitment “from day one” to making the HWO serviceable — meaning the telescope could be repaired and upgraded after launch, something that isn’t possible with Webb (and had to be improvised even for the much closer Hubble).

“In 10, 15 years, there are going to be a lot of companies that can do very straightforward robotic servicing at L2,” Clampin said.

Serviceability could go a long way toward helping NASA surmount perhaps the biggest hurdle to getting the HWO off the ground: convincing Congress to fund the project.

Because NASA will be able to fix problems and update instruments, HWO could potentially remain operational for years or even decades longer than other space telescopes, giving Congress more of a return on its investment.

Serviceability could also help ensure that NASA launches the telescope on time — a key concern, since costly delays bedeviled the Webb project for years. Instead of delaying the mission because part of the system is behind schedule, NASA could go forward with the launch and update the HWO later.

“[Servicing] gives us flexibility, because it means we don’t necessarily have to hit all of the science goals the first time,” said Clampin.

If NASA is able to get Congress to fund the HWO, the observatory has the potential to revolutionize our understanding of the universe — and our place within it — more than any spacecraft before it.

“If planets like Earth are rare, our own world becomes even more precious,” write the Astro2020 authors. “If we do discover the signature of life in another planetary system, it will change our place in the universe in a way not seen since the days of Copernicus — placing Earth among a community and continuum of worlds.” 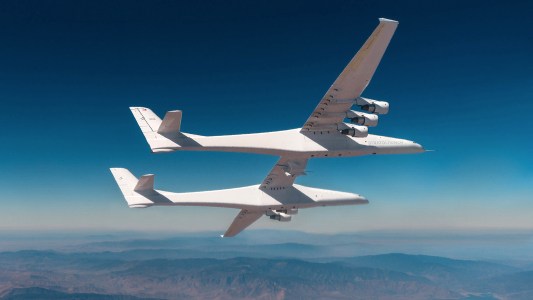 A new test flight puts the world’s largest plane one step closer to helping the US develop — and respond to — hypersonic weapons.