NASA’s James Webb Space Telescope is turning out to be a photogenic spacecraft.

In the three months since its launch, Webb has already sent back two selfies, and now we have a photo of the space telescope taken from the perspective of its neighbor: the European Space Agency’s (ESA) Gaia observatory.

Lagrange points: Earth, like every planet that orbits a star, has five Lagrange points. These are places where the gravitational pulls of the sun and Earth form a sort of equilibrium that causes any smaller object at the Lagrange point to stay put and orbit the sun right along with us.

Earth’s second Lagrange point (L2) is about 932,000 miles away from us in the opposite direction of the sun, and it’s a great location for space telescopes.

It’s close enough for easy communication with Earth and for solar to be a viable power source, and because the Earth and the sun are always on the same side of a telescope at L2, its view in the opposite direction is always unobstructed.

New in town: Webb just reached L2 in January 2022, but ESA’s Gaia space observatory has been living there since 2014. Its mission is to create our largest, most precise map of the Milky Way by observing about one billion different stars an average of 70 times each.

Gaia isn’t designed to take pictures of these stars — it uses other instruments to measure their locations, motions, and more — but it does have a “sky mapper” feature that regularly takes and deletes images to help its main instruments home in on new targets.

Smile: Two Gaia scientists — Uli Bastian of Heidelberg University and Francois Mignard of Nice Observatory — realized that Webb would be crossing their space telescope’s field of view for the first time on February 18, so they decided to try capturing a photo of it.

When the day came, they downloaded the sky mapper images before they’d be deleted. They then emailed the images to others on the Gaia team, and a few days later, Juanma Martin-Fleitas, ESA’s Gaia calibration engineer, sent an email back.

“I’ve identified our target,” he wrote, along with images in which small specks were labeled “Webb candidates.”

Bastian analyzed the image before responding: “Your ‘candidates’ can be safely renamed ‘Webb’.”

Space buddies: NASA hopes to have Webb imaging the cosmos for at least another decade, and Gaia’s mission isn’t expected to end until 2025.

During these next few years, ESA expects Webb to pass by their space telescope’s eyeline several dozen times, so this might be Gaia’s first pic of its new neighbor, but likely not its last. 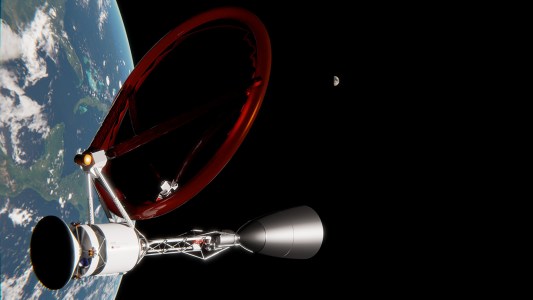 Researchers have proposed an idea that will cut travel time to Mars down to just 45 days. All it takes is hitching a ride on a giant laser.

Aerospace
Researchers scheme how they could ride a laser to Mars
By Teresa Carey
Subscribe to Freethink for more great stories
Subscription Center
Sections
Video
Freethink
Subscribe
We focus on solutions: the smartest people, the biggest ideas, and the most ground breaking technology shaping our future.
Subscribe