As of this writing, 37 people have been rescued from a Florida condo building that collapsed in the early morning of June 24. However, more than 140 others still remain unaccounted for — and rescue robots have now been sent in to help find them.

The challenge: Search-and-rescue efforts are often a race against the clock — in a situation like a collapsed building, the likelihood of finding survivors wanes with each passing hour.

However, a collapsed building is an incredibly dangerous place for first responders, too, so they must be very deliberate in navigating it — one wrong move and the rubble might shift in a way that compromises their own safety or the people they’re trying to rescue.

On the morning of July 1, another part of the building in Florida started showing signs that it might collapse, so first responders were pulled from the site for most of the day. When the search resumed, their access was limited.

Rescue robots: Robots can be a powerful tool in search-and-rescue operations, using cameras and other sensors to look for signs of survivors without putting human responders at risk.

“In a collapse situation like this, the pile is structurally unsound and constantly vulnerable to shifting,” Tom Frost, vice president of unmanned ground systems at robotics company Teledyne Flir, told the Washington Post. “It’s much safer to have a robot crawl deeper into a void than to have a person crawling into that void.”

Offer of help: Teledyne Flir has sent at least two of its rescue robots to the Miami-Dade Fire Department (MDFR) to help with the Florida disaster, according to the Post.

One is a seven-pound, tank-like robot called FirstLook. It’s equipped with cameras and microphones and can survive drops of up to 16 feet onto concrete.

“You can take this robot and throw (it) through a window or throw it on a roof, and get to really hard to access places,” Frost said.

The other is a suitcase-sized robot called PackBot. It assisted with rescue efforts following the 9/11 terrorist attack on the World Trade Center and is designed to move objects and carry loads of up to 40 pounds.

The next steps: It’s not clear whether the MDFR has deployed either of the rescue robots yet or plans to in the future.

However, first responders have already used drones, sonar, and other technologies — and with safety concerns limiting what human rescuers can do right now, ground robots might be a valuable addition to the rescue effort.

Aerospace
Watch NASA’s flying space bots work alongside astronauts
The three Astrobee robots aboard the ISS foreshadow a future in which autonomous bots are NASA astronauts’ partners in space.

Aerospace
NASA will send two more helicopters to Mars to bring home samples
Inspired by the overachieving Ingenuity, NASA has updated the Mars Sample Return mission to include two new Mars helicopters.
Up Next 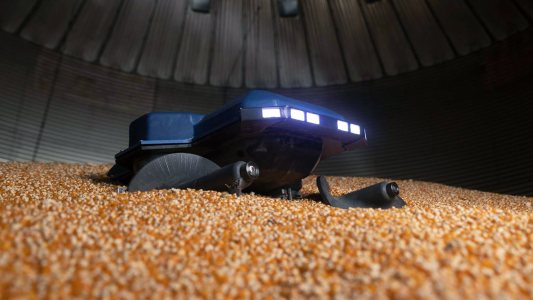 The Grain Weevil robot helps farmers manage stored grain, keeping them out of bins where they might lose their lives to grain entrapment.

Agriculture
A robot could save farmers from being buried alive in grain
Subscribe to Freethink for more great stories
Subscription Center
Challenges
Video
Freethink
Subscribe
We focus on solutions: the smartest people, the biggest ideas, and the most ground breaking technology shaping our future.
Subscribe