A furniture store owner nicknamed “Mattress Mack” has opened up his showroom to Hurricane Ida victims, giving them a free place to sleep in the wake of the devastating storm — and it’s not the first time he’s stepped up for those in need.

Displaced Hurricane Ida victims: Hurricane Ida made landfall in Louisiana on August 29, destroying homes and leaving more than one million residents without electricity before moving north.

“If you have already evacuated, do not return.”

“Many of the life-supporting infrastructure elements are not present. They’re not operating right now,” he said during a press conference on August 31. “So if you have already evacuated, do not return … until the office of emergency preparedness tells you it’s ready to receive you.”

Mattress Mack: Jim McIngvale — owner of Houston’s Gallery Furniture — is one of those leading the charge to help Hurricane Ida victims.

Soon after the storm hit the Gulf Coast, the man better known as “Mattress Mack” announced a donation drive, asking locals to bring non-perishable food, water, and other supplies to his store over the next few days.

He also had a message for any Louisianans displaced by the hurricane.

“Anybody that fled from Hurricane Ida that’s in Houston that needs a place to stay, come on by,” he said. “You can sleep for free and eat for free … for the next several days. We got free housing here. Lots of mattresses, lots of sofas, so you can chill out and get your bearings.”

As of September 1, about 50 families and individuals had shown up at Gallery Furniture for food and shelter, McIngvale told the Washington Post.

“You can see the stress and trauma on their faces when they come in,” he said. “They’ve had their lives turned upside down, and we’re going to do all we can to help them.”

As for the donation drive, 30 trucks full of supplies for Hurricane Ida victims had already left Texas for New Orleans at the time of WaPo’s report, and the volunteers had collected enough goods to fill about 70 more.

Texas-sized heart: McIngvale is well known around Houston for his generosity (and his sometimes-silly commercials) — he’d previously offered up his showroom to people displaced by Hurricanes Katrina and Harvey, as well as Tropical Storm Imelda.

Most recently, he offered Texans a place to stay after the state was hit by a deadly snow storm in February 2021.

“If you knew Mack, you wouldn’t be surprised by the long lines of people in their cars waiting to pop their trunks and donate what’s inside,” David Maulsby, a friend of McIngvale who helped coordinate the Hurricane Ida volunteer effort, told WaPo.

Climate Crisis
These ancient trees survived a wildfire because of fire
The survival of an ancient grove of trees in Yosemite may be a powerful case study for controlled burns.
By B. David Zarley
Up Next 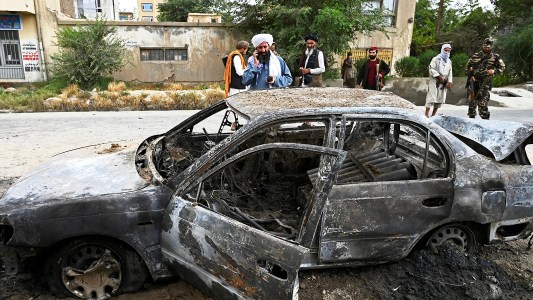