The New York City Medical Examiner’s Office has just identified the remains of two people killed in the September 11 terrorist attack on the World Trade Center — and an advanced DNA analysis tech promises to help them bring closure to more families of 9/11 victims in the near future.

Identifying 9/11 victims: After the September 11 terrorist attack, workers spent nine months carefully sifting through the wreckage of the World Trade Center, looking for the remains of the 2,753 people believed to have been killed during the catastrophe.

They eventually recovered about 300 bodies and 22,000 body parts from the wreckage, and forensic scientists were able to connect those remains to more than 1,600 9/11 victims using DNA samples provided by people who knew them.

The act of recovering and identifying human remains has been shown to help families heal and achieve closure after the death of a loved one, so the scientists promised that they would do whatever they could to reunite victims’ families with their loved ones’ remains.

Two new IDs: The New York City Medical Examiner’s Office has continuously upgraded its technology over the past two decades, implementing the latest DNA analysis methods — and developing new ones —  in the hopes of identifying more 9/11 victims.

That determination has paid off.

On September 7, Chief Medical Examiner Barbara A. Sampson announced that her office had identified two more 9/11 victims: an insurance broker named Dorothy Morgan and a man whose family asked that he remain anonymous.

These were the first two 9/11 identifications scientists had been able to make in nearly two years.

“Twenty years ago, we made a promise to the families of World Trade Center victims to do whatever it takes for as long as it takes to identify their loved ones, and with these two new identifications, we continue to fulfill that sacred obligation,” Sampson said.

“No matter how much time passes since September 11, 2001, we will never forget,” she continued, “and we pledge to use all the tools at our disposal to make sure all those who were lost can be reunited with their families.”

Now, they have one more tool at their disposal: next-generation DNA sequencing.

However, the Department of Defense has used the technique to identify deceased military members, and in late August, Newsday reported that NYC’s medical examiner’s office was approved to use it to analyze the remains of 9/11 victims.

“[Mitochondrial DNA] can be a powerful tool for human identification.”

This approach to DNA analysis looks at a cell’s mitochondria rather than the nucleus, like conventional DNA analysis techniques do.

Because most human cells have just one nucleus but up to thousands of mitochondria this analysis can be particularly useful for extracting DNA from human remains that have been damaged.

“Because [mitochondrial DNA] is found in higher copy number per cell than nuclear DNA, it can survive environments where nuclear DNA does not and can be a powerful tool for human identification,” according to Illumina, a company that develops next-generation sequencing tech.

In addition to being more sensitive than traditional DNA analysis techniques, it’s also faster, cheaper, and can analyze multiple samples at a time instead of just one.

RIght now, the office’s forensic scientists are still training on next-generation sequencing, but they aim to use it to analyze — and, hopefully, identify — the remains of 9/11 victims by the end of 2021.

“It’s a much more sensitive technology, so we’re very hopeful it will help us find more new identifications,” Sampson told the New York Times. “We committed back then to do whatever it takes, as long as it takes and that’s what we’ll continue to do so.” 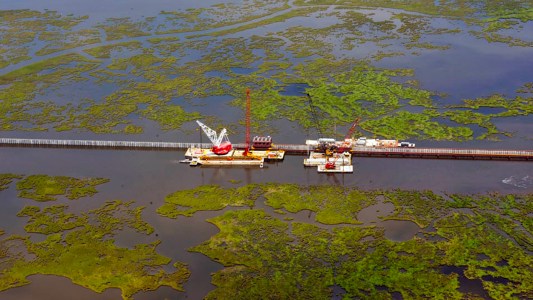 By going beyond the “100-year storm” standard for flood protection, U.S. engineers helped minimize the impact of Hurricane Ida on New Orleans.